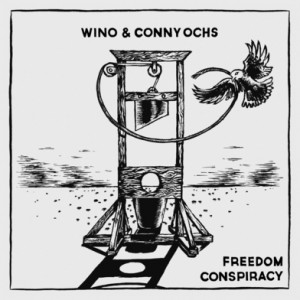 Exile On Mainstream announce the label’s next priority release; Freedom Conspiracy, the second collaborative album by Scott “Wino” Weinrich and Conny Ochs which shall be released on 30th March. Recorded at Kabumm Studio with producer Thommy Krawallo (as with their Heavy Kingdom LP), this newest collection presents ambitious, haunting and beautiful music, created by the strikingly natural singer/songwriter duo.

Freedom Conspiracy was written and recorded with Wino & Conny Ochs performing all instruments. The approach differed from Heavy Kingdom in that it was created with each bringing rudimentary ideas to the table and then carving them into songs together. Deftly fusing acoustic and electric guitars, and with both artists’ standout vocal styles searing through these thirteen well-crafted brand new hymns, the initial recordings of the album date back to over a year ago, but even though the songs were complete, these protagonists felt the album needed more time. Final touches couldn’t be made until they were together again in the same room, and due to their other musical obligations, the record was left to mature for several months. In early 2014, Wino and Conny revisited the material, stripped everything down to the bare bones and arranged the tracks differently, and then it clicked. The result – forty-five minutes of refined, dynamic and unforgettable folk/rock music.

When asked what the album meant to the artists themselves, Conny Ochs states: “Freedom Conspiracy means companionship. It means to have each other’s back. This album is about losing and finding belief. And fighting for it.” Adds Wino on the album: “Shits changin’ fast. With war on every corner, political theatre becoming increasingly more offensive, and Big Brother and the Globalists intensifying their slow takeover, we offer sounds and vibrations of love, death, happiness and pain! With this music and verse we hope the songs will inspire and uplift, and hopefully unite our searching spirits.”