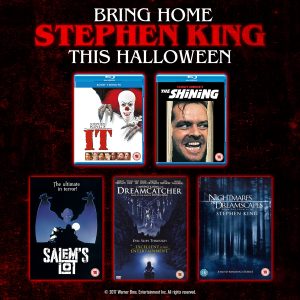 Well okay, you can’t really win Stephen King, but thanks to Warner Bros. one of you lucky scamps who manages to answer the below question correctly will win DVD / Blu-Ray copies of It, The Shining, Dreamcatcher and Nightmares & Dreamscapes. Which is, y’know, pretty darn cool.

So, if you fancy the sound of that horrifically good bundle of visual swag, all you have to do to win it is send your answer to info(at)massmovement.co.uk along with your name and address by the 5th of November and one of you cool cats (chosen at random) will walk away with the films. Oh, and make sure the subject line of your email reads “Gimme Stephen King” because if it doesn’t there’s a good chance it’ll end up being junked…

Whoops, I nearly forgot. The question. Here it is:

And don’t forget, if you don’t win, but really want to watch the films, you can always pick them up here