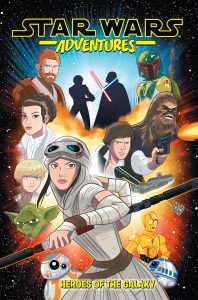 Travel to a galaxy far, far away in the first volume of an all-new series as a rotating cast of characters (and creators) journey through the Star Wars universe! IDW Publishing presents Star Wars Adventures Vol. 1: Heroes of the Galaxy. This volume collects the first two issues from IDW’s ongoing Star Wars Adventures series, as well as the special preview issue that debuted at San Diego Comic-Con.

Stories span the entire Star Wars universe from the original trilogy, to animation, and through to The Last Jedi, in theaters December 15, 2017. Characters both major and minor, classic and new, expand the world of Star Wars into new territory, telling larger-than-life stories that encapsulate the breadth of the galactic struggle between good and evil for a new generation of fans.

“The great thing about Star Wars Adventures is that, as well as introducing a whole host of people to Star Wars, these issues may even be a kid’s introduction to comics, and to reading in general,” said co-author Cavan Scott. “They can introduce young readers to so many incredible worlds, and really instill a love of reading at an early age. They did for me.”

For fans of all ages and with a mix of old and new characters, Star Wars Adventures will appeal to Jedi everywhere, Master and Padawan alike!