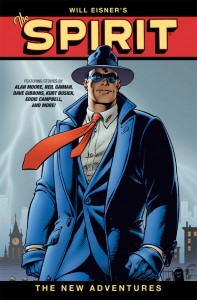 First appearing in 1940 as an insert in two separate newspapers, Will Eisner’s The Spirit will not die. The last part of the last sentence should at least get a smirk from fans of Eisner’s creation. Since then, The Spirit has become a legend even with its publication hiatuses. In the intro to the book by Dennis Kitchen, it states that even Eisner was surprised that his creation, Dennis Colt Jr. (AKA The Spirit) would not fade away. The tales featured in this collection are taken from Kitchen Sink Press, Dark Horse Books, and best of all, include an unpublished story.

The stories while sometimes not solely focused on The Spirit, are as varied as could possibly be, due to the creative teams responsible for them. From Alan Moore and Dave Gibbons chronicling Colt’s apparent death by Cobra (who we can only surmise is The Octopus), to Joe R. Lansdale and John Lucas’s tale of an alien scamming insurance companies in a an effort to afford the fare home, to Swami Vashtibubu by John Ostrnader and Tom Mandrake about a fortune teller who can see the future being used to The Return of the Mink Stole by Neil Gaiman and Eddie Campbell which is about a writer trying to write a hero story not knowing he is actually caught up in one. While not all the stories included were completely involving, what is here is a fun trip into the annals of a comic I really don’t read. Before now, the closest I got to The Spirit was the 2008 film, which as we all know was interesting, in both a good and a bad way. The New Adventures is a much better way to get into this classic character. It’s an interesting book, one that can be indulged in over time, rather than consumed in one marathon session. Dark Horse keep on releasing great archival material, which even though it might not be to everyone’s taste, is still more than worthy of your time and attention.  Jason Bonton