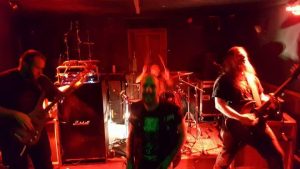 Following on from the rousing success of their 2012 record “Death Valley Duchess”, Nottingham stoner rock crew Widows are soon to head into Skyhammer Studios in Cheshire to record their new album “Oh, Deer God”, which is set for release in November 2016. Their first record with new bassist, Phil Emblin.

“It’s been a long time since our last release so we’re super excited to be back in the studio and we are definitely bringing the riffs!. With Phil joining us on bass, we’re finally writing as a whole band again. His influence has inevitably crept into the writing process and helped us evolve to come up with something darker and more aggressive than the last album. The new stuff is definitely more stripped back, and heavier than our previous offerings. Given the sound we’re going for with the 7 tracks on “Oh Deer God”, Skyhammer was the obvious choice. Chris is a great engineer and Adam (vocals) and I had wanted to work with him for a long time before Skyhammer and Widows even existed. He’s been at the helm of a bunch of excellent albums over the last few years so we know he’ll steer us right. Don’t worry though, that Widows groove is still firmly front and centre!” 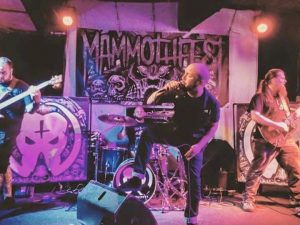 Formed in 2008, Widows play music you can raise a beer and swing a fist to, and they do it hard, fast and loud. With bone crushing grooves and an undeniable swagger!

Influenced by the likes of Down, Kyuss, and Clutch, Widows released their debut EP, “Raise the Monolith”, in 2010. The subsequent shows bolstered their reputation as an impressive live band as they chewed up venues and damaged people’s hearing across the UK.

Their next album, Death Valley Duchess”, was recorded after a desert rock pilgrimage by members James and vocalist Adam to the Californian desert in a bid to inspire both the music and album artwork. It was released worldwide in 2012 followed by several tours across the UK, Europe and Scandinavia, and supported with playlisting on Kerrang! Radio and Propeller TV’s Metal Tuune and Tuune Rocks shows. All this next to a string of killer shows with Tombstones, Orange Goblin, and Valient Thorr. and festivals including Desert Fest 2012 (London), Waterfront Festival 2010/14 (Nottingham), Hockley Hustle 2014 (Nottingham), Riff Fest 2014 (Bolton) Macmillan Fest 2015 (Nottingham) and Mammothfest 2015 (Brighton).