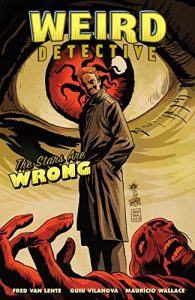 There are few writers who have had the same kind of cultural and literary impact as H.P. Lovecraft, whose stories of the Cthulhu Mythos and tales of the Great Old One’s continue to fascinate, enthral and inspire generation after generation of readers and fans. Weird Detective, possibly named in tribute to Weird Tales the pulp magazine that first published The Call of Cthulhu, is Fred Van Lente’s love letter to the grandfather of Cosmic Horror. Van Lente transplants The Shadow Out of Time to modern day New York, sprinkles it with a little of Jim Kouf’s The Hidden and delivers a hard boiled crime thriller  which weaves murder, intrigue, police corruption and the story of ancient and unimaginably different alien race seeking to atone for the mistakes of their past into its entertaining Marlowe-esque plot.  Effortlessly combining dark as the cold depths of space humour, monstrous murder mystery and an endearing stranger in a strange land subplot, Weird Detective explores the complexities of human frailty and endeavour and how relationships are forged by the strangest of circumstance and uses its titular character to ridicule the absurdity of common place human behaviour.

Vilanova’s artwork is the perfect vessel for Van Lente’s story, as he captures the essence, excitement and spirt of the mythology of the pulp era, but gives it a modern edge, which soaks it in the urban grit of twenty first century New York. The characterisation is flawless, the subplots and relationships that dance around the edge of the main story are meticulously detailed and the dialogue is sharp enough to slice through steel. And the running joke about protagonist Sebastian Greene’s origins never gets old.  It is, truth be told, one of the most original, yet at the same time instantly familiar, Lovecraft homages that it’s been my distinct pleasure to read, and I’m sure that if old Howard Phillips himself spent an afternoon with it, it would bring a smile of approval to his permanently scowling visage. Mr Van Lente, it would seem, was misinformed in his belief that The Stars Are Wrong. They’re not. They’re right. So very, very right. Hail horrors, hail… Tim Cundle