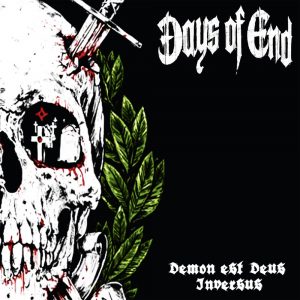 As statements of intent go, the title of Days of End’s debut EP is almost as powerful as the music it contains. Proclaiming that the Devil is merely the inversion of God and vice versa, the rejection of accepted theism is just the tip of the sword that this Integrity influenced metal heavy UKHC powerhouse uses to cut through the bullshit and serve up five doses of brutally heavy Hardcore destruction. While I’ve never exactly been a fan of the Clevo sound that obviously helped give rise to Days of End, I’m a sucker for the ripping, rending, tearing, howling maelstrom of fury that this band have created. Far surpassing their influences, Days of End have transcended the role of pupil to become the true masters of beat-down Hardcore. It’s time to bring the pain; it’s time for Days of End… Tim Cundle