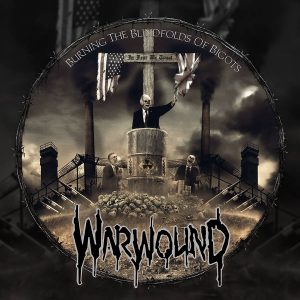 Originally established in 1982, a reformed and revitalised Warwound have been doing the rounds for a couple of years, and finally they present to you their brutal new full length. Original member Damien Thompson (also of Sacrilege & Varukers fame) has been joined by Ian Glasper (Stampin Ground, 36 Strategies and a million more), Stevie Wingrove (Hellkrusher, The Vile and many more) and Rat (Varukers amongst others) to complete the very strong line-up. As you would expect of such a team, expectations for this new record will be very high, and fortunately this album doesn’t disappoint. There’s not really a need to drop those names above as the album stands on its own two feet, but in fact it is that combination of influences from the different band members – you can hear touches of previous endeavours throughout here and they way they are thrown together and shaken up is what makes this record stand out. Add to that a hard, metallic production that really drives the tunes and you’ve got the making of a great album. As well as a pile of original songs, there is a killer cover of Sacrilege’s The Closing Irony which features guest vocals from Tam if I’m not mistaken. One thing a lot of these guys’ previous bands have in common is their molten lava metal-punk hybrid, and this album is the latest volcano about to erupt. Tom Chapman