Despite some exceptional exponents (the Slits, Kathleen Hanna, Poly Styrene, Eve Libertine and Laura Jane Grace to name just five) feminism and transgender issues are often overlooked, under represented or sadly mocked in the Punk/Hardcore scenes, so it’s refreshing to find a band putting both back on the agenda in such a positive and defiant way. Shawna from Baltimore’s War On Women discusses the band’s eponymous album on Bridge Nine records and their raison d’existence.

MM: How did WOW come about? Were you all playing in different bands prior to this?
WOW: I think that info is in our press release, and in old interviews!

MM: What do you guys do outside of the band?
WOW: Brooks and I run Big Crunch Amp & Guitar Repair, Nancy works in production at a big club, Sue is a computer scientist at Johns Hopkins, and Evan makes the best damn pickles you’ll ever taste (check out Tanner’s Pickles!)

MM: Was the primary aim of WOW to put forward a Feminist point of view both within the Hardcore scene and in a broader sense?
WOW: YES!

MM: Why do you think that sexism has continued to pervade Punk and Hardcore and be accepted/tolerated in a way that racism and homophobia are not?
WOW: Oh, don’t count racism and homophobia out! People are still assholes, they’re just more subtle about it. And don’t forget, transphobia – there are more than two genders! We need more outspoken allies who refuse to put up with that shit. We need spaces that are explicitly welcoming to women and LGBTQ folks. Women are not coat racks. 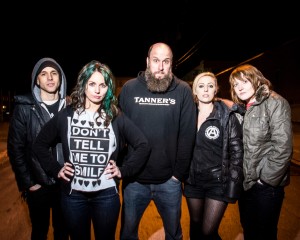 MM: Who/What influences you both musically and politically/socially?
WOW: I hope that the stuff I listen to seeps into my brain, but without me knowing it. I don’t want to be directly influenced by anything. I want it all to jumble around and come out a little different. Right now I love Zombi, I’m revisiting ZZ Top and Slant 6, and I’m about to read “What Are You Doing Here?”, although I might wait to read it until our upcoming tour with Antiflag in May (I think this is Laina Dawe’s book about her experiences as a black women in the metal genre – IP). I’m inspired by the women who started #BlackLivesMatter, I’m inspired by my fellow activists in Baltimore, I’m inspired by the Green Party…I guess right now, as I answer this, I’d rather be inspired than influenced.

MM: When reviewing your album I compared it to Propagandhi; is this accurate? You’ve toured with them too right?
WOW: Yes, we have toured with them. Actually, they wrote all our riffs…but we wrote all of theirs, so it evens out. JUST KIDDING! Yes, they fucking rule, it would be hard to hide the fact that we listen to their records a lot.

MM: The albums just come out on Bridge Nine records; how’s the reception to it been? Are you happy with the way it’s turned out? How did you come to work with B9?
WOW: We love the record, we love Bridge Nine, and we have gotten a lot of good reviews, so I think it has been received well. I mean, we do mail them out with free condoms, so I know those have been received well….

MM: It’s great to see meaningful lyrics taking such a prominent place in Punk/Hardcore again, do you write all the lyrics or is it collaborative? And the music?
WOW: I write all the lyrics; every once in a while I’ll ask for help finishing a line or something. Everyone else has a hand in writing the music, but we work together to finish it, to make sure everything is cohesive.

MM: The lyrics challenge perceptions and issues that impact women every day, such as rape and access to contraception, but which seem to be frequently buried in the media; as a father to two daughters I found ‘Say It’ incredibly powerful and emotionally moving, what’s the usual response to the bands lyrics? Judging by the song ‘YouTube Comments’ I’m assuming it’s not always positive?

WOW: Not always, but mostly it’s good. We have started bringing info cards to our shows with the number to a sexual assault hotline on it, in case anyone is mega triggered during our performance. We know it can be a hard thing to hear “I was raped” screamed really loudly over and over, and we want to do our part to make sure everyone is taking care of themselves….so when we’re thinking of stuff like that, it’s easy to not give a shit about what negative thing someone MIGHT say about the band, you know? We’re dealing with real shit, here.

MM: On ‘Second Wave Goodbye’ you seem to be criticising other feminists for their attitude to transgendered people or have I misunderstood that song?
WOW: No, that’s accurate! It’s not all feminists, of course, but there’s a small and vocal minority that seem to align all their ideals with conservative white men. It’s weird! But I gotta call you out, however gently – you want to say/type/use “transgender,” not “transgendered” – it’s who you are, not something that happens to you.

MM: Vocally there’s quite a contrast on the song ‘Jordan’; what’s that song about?
It seems very personal?
WOW: It’s about the first person I ever played music with. A girl named Jordan, who sang and played violin. I sang and played guitar, and eventually we found a bassist and a drummer. She ended up dying a few years after the band broke up, she was very young, barely out of high school. It was really sad and weird. The first death I really dealt with…or didn’t deal with, actually. It took a while for it to really hit me.

MM: Do you feel the media are still deliberately trying to undermine Feminism and that this has actually got worse through the 80s/90s/00s with the advent of ‘Lad Mag’ culture? Do you find it more frustrating or disheartening when you see women proudly proclaiming they are not Feminists?
WOW: Don’t hate the player, hate the game. And then shine a giant flashlight on its darkest hiding places, and then dismantle it completely. 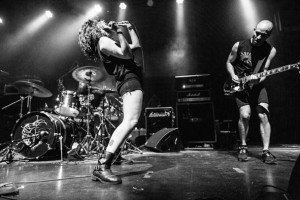 MM: Why are we still putting the onus on women to avoid getting raped rather than putting the responsibility on men not to rape? Do you feel films, video games and songs contribute to that view?
WOW: I think the best thing I can do in my position as the front-person for WOW is put out the media that I think is needed or lacking. If the structural and institutional sexism currently in place just wasn’t there, then it wouldn’t be a big deal to see violent media sometimes, it would just be one of many options. I personally try not to financially support stuff that mimics gender-based violence with no comment or analysis, I just have no interest in it.

MM: What’s next for WOW? Any plans to play Europe/UK?
WOW: YES! Look out for us in August of this year!

MM: Parting Shots or Final Comments?
WOW: I am sleepy. I hope what I wrote makes some sense. Also, let’s all high-five at the merch table!

Thanks to Shawna for taking the time out to do this.