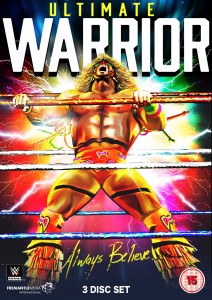 Ultimate Warrior: Always Believe (WWE DVD)
You have heard of a game of two halves – well this truly is a collection of three thirds!  Disc One is essential viewing: an updated version of the beautifully made documentary about the life and death of wrestling legend, The Ultimate Warrior, which originally aired on WWE Network directly after Warrior’s shocking death last year.  With backstage footage from Warrior’s Hall of Fame, Wrestlemania and Raw appearances in the last three days of his life, we get a true insight into the emotional homecoming of this long exiled superstar as well as Warrior the man, hanging out with his wife and daughters.  Emotional reunions with Vince McMahon and Hulk Hogan are highlights, and the documentary is full of Warrior’s story in Warrior’s own words, but the real charm comes from the loving words from Warrior’s wife and children as they talk about the husband and father they lost.  Specifically featured is Warrior’s daughter, Mattigan, who dreams of one day being a WWE diva – and it’s hard not to feel moved to see her working out in the NXT ring with Nattie Neidhart and hear her father’s music play as she gets the winning three count.

I reviewed the previous Ultimate Warrior DVD that was released last year, and remember commenting how pleasantly surprised I was to see such a powerful collection of matches from a performer I largely remember for an entrance and his passion, but never for his actual wrestling.  Unfortunately, it seems that the vault of good Warrior matches was picked dry for that initial release, and we are left here with the dregs.  While there is no denying the pure spectacle of Warrior fighting anybody – a whirling dervish of colour and intensity – the matches here are inessential and repetitive.  Nothing new is seen that wasn’t available – and much better – on the previous release, and once watched it is highly unlikely you will ever want to watch this disc again.
The same cannot be said for Disc 3 – the worst, and yet also possibly the best, disc of the collection.  Whoever had the idea to fill an entire DVD with nothing but Ultimate Warrior promos was either clinically insane or desperate to tap in to the stoner market.  This ninety minute exodus into lunatic ranting, snarling and crazed non sequitur is almost performance art in its sheer weirdness.  An epic poem of aimless rage and mythos – Warrior’s promos were unique and they are strangely good in their absurdity.  Sure, after twenty minutes of it your brain has melted and you are left a drivelling, snivelling, quivering wreck on the floor, barking threats about legendary gods and storms of vengeance (“I had them stitch the piece of broken glass into my head!”), but I will definitely be showing this disc to my friends over and over again – and it will no doubt make excellent 3am viewing for those narcotically inclined.

The Ultimate Warrior was a performer without parallel, and these three discs encapsulate all aspects of him in wonderful fashion.  A smart and sentimental documentary film, a sample of his mediocre matches, and the canon of his unforgettably weird and wacky promos.  If you want to truly feel the power of the Ultimate Warrior, you need this in your life! DM