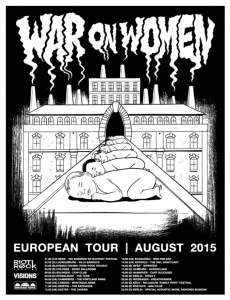 Baltimore’s feminist punk heroes War On Women are gearing up for a UK and European tour this August. The headlining tour – which marks the second overseas jaunt for the band – includes twenty dates in various territories and the full routing can be found below. Vocalist Shawna Potter commented, “This will be our second time touring Europe/UK but it’s the first time we’re going out on our own. We’re so stoked to see some friendly faces when we play with our friends AntiFlag and Against Me! at Punk Rock Holiday, and Boy Sets Fire at Family First Fest. And to see the German countryside again!”
War On Women recently released their self-titled debut full-length which tackles issues of institutionalized sexism and patriarchy through an uproarious blend of riot grrrl, thrash and rock with sarcastic dalliances and furious aggression. Featuring 11 tracks, the album was recorded with J. Robbins at the Magpie Cage (Against Me!, Coliseum, Lemuria) and is a natural progression for the band and just as blistering as ever.
Additionally, War On Women just wrapped a string of U.S. shows with punk stalwarts Refused, Anti-Flag and many others. Along the tour, they made a stop in NYC to play live on the Chris Gethard show, and their performance is not unlike the legendary FEAR performance on SNL (in our opinion). Watch War On Women perform “Say It” on the Chris Gethard show here.
More War On Women info coming soon. Keep up with them on Facebook and Twitter.