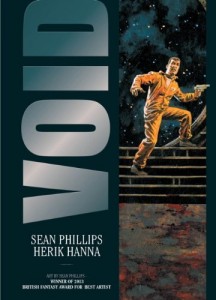 Void – Sean Phillips & Herik Hanna (Titan Comics)
It isn’t true you know. That in space, no one can hear you scream. In space, everyone can hear you scream, and especially so if you were one of the crew members or prisoners aboard the prison ship Goliath 01, the craft that, thanks to insanity of its commanding officer Colonel Mercer, becomes an intergalactic charnal house in ‘Void’. Only one of the crew, John, manages to escape the fevered clutches of his superior, and as ‘Void’ begins, so does a frantic game of cat and mouse as John desperately searches for a way off the ship before he ends up sharing the same fate as his colleagues and the men he was supposed to guard and protect.

‘Void’, while being fairly straight forward as far as its central plot is concerned, is nonetheless an engrossing and captivating read as it’s slowly unfolding story envelopes the reader in the ever increasing feelings of paranoia, fear, isolation and dread that crush John as he frantically searches for a way to escape his hunter and the cold, dark corridors of the behemoth in which he’s trapped. Beautifully illustrated and brought to chilling life by Sean Phillips, ‘Void’ looks, feels and reads like a heartfelt ode to the Science Fiction films, thrillers and comics that seem to have inspired it, namely ‘Dark Star’, ‘Lifeboat’, ‘Event Horizon’, ‘Sleuth’, ‘Deathtrap’ and 2000 AD’s woefully under-appreciated ‘Future Shocks’, taking the best elements for each and incorporating them into its take of all-encompassing madness and desperate loneliness. Even though the delightful twist in the tale becomes readily apparent about a third of the way in, and through the story, you can’t help but become entangled in ‘Void’s claustrophobic embrace, as John races away from, and ultimately toward, his eventual fate. In space, everyone can hear you scream… Tim Mass Movement