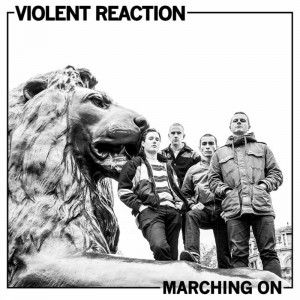 UK-based VIOLENT REACTION is gearing up for the release of the riotous act’s sophomore LP, Marching On, their first through the mighty Revelation Records, and as an early exclusive, Vice Magazine’s music channel, Noisey, is running the album’s ripping “Leave Me Out.”

Originally conceived and executed as a one-man project by Tom Pimlott on the banks of the Mersey River in Liverpool, VIOLENT REACTION is already responsible for several well-received recordings since its 2011 inception. Through an initial demo, a self-titled EP through Quality Control Records and reissued by 6131 Records, the Painkiller Records-released 2013 debut LP, City Streets — of which multiple pressings have been sold — and 2014-released Dead-End EP, also through Painkiller, the Oi-influenced, straightedge, hardcore streetpunk vitality of these works now sees the name VIOLENT REACTION a centerpiece of the current UK scene. Pimlott has recently relocated to Leeds and expanded the outfit to a full lineup, which has already hit the ground at full steam, including US tours with Hounds Of Hate and brother band, The Flex, under their belts.

2015 sees VIOLENT REACTION striking harder than ever, having inked a worldwide deal with Revelation Records, for the upcoming release of their second LP, Marching On, a must-hear for disciples of Negative Approach, Blitz, The 4-Skins, Straight Ahead, The Pist and 86 Mentality.

Noisey busted one of VIOLENT REACTION‘s new anthems out early with the track “Leave Me Out” now playing at THIS LOCATION.

Marching On will see release on CD, colored LP with digital download, and full digital distribution on March 31st. Preorders will be launched at the beginning of March alongside other new tunes from the album and more.

In support of their first release through Revelation, VIOLENT REACTION returns to the US early this Spring, having just confirmed a new set of tour dates. Beginning March 31st the band will trample through the Northeastern states, with shows in Richmond, Philadelphia, New York, Boston, Rochester, Detroit, Chicago, Indianapolis and Pittsburgh. Stand by for additional tour actions to be announced.

Nearly thirty years after its 1987 inception, renowned Huntington Beach, California-based Revelation Records continues to bring high quality releases from the hardcore/punk underground to life. Founded in NYC by Youth Of Today’s Ray Cappo, the label’s name is synonymous with the American hardcore movement and its worldwide proliferation. Besides seminal early releases by Youth of Today, Judge, Warzone, Gorilla Biscuits, Sick of It All, Chain of Strength, Side By Side and others in the late ’80s and early ’90s, Revelation has continually released torch bearers of the underground, having introduced forward-thinking acts like Quicksand, Texas Is The Reason, Kiss It Goodbye, Shai Hulud, Ignite, Down To Nothing and many others since.