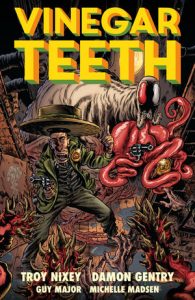 Touted as Lovecraft meets Lethal Weapon, Vinegar Teeth sees Detective Artie Buckle reluctantly taking on the hideous yet extremely polite space mutant Vinegar Teeth (so named for his honking breath) as his partner at the Brick City Police Department, just in time for the occurrence of a mysterious interstellar war, and the citizens of Brick City becoming fiercely dehydrated zombies.

Artie is a loose cannon, and a salty booze hound, recently divorced and drinking in his bath tub every chance he gets. Between his long suffering co-workers and his vocal distaste for authority, the hamburglars of B.C. are far from shaking in their boots. When Vinegar Teeth quite literally falls from the sky during the culmination of Artie’s ongoing undercover operation and eats his crime boss, the police department hail him as a hero, chuck him a weird crown to wear (because you can’t pin a badge to reptilian/fish/spongy intestine looking flesh) and obviously, hijinks ensue.

The art in Vinegar Teeth is, to put it quite crudely, filth. And I love it. It reminds me of Nicklodeon’s Real Monsters. It reminds me of Ren & Stimpy. It reminds me of Catdog, and it reminds me of the way you used to be able to smell the toxic waste and dirty water, the farts and puke and piss of cartoons produced in the mid to late 90s.  Like Mike Judge ate every copy of Mad Magazine for breakfast. There’s gunge, there’s gore, there’s dismembered hands giving you the finger, there’s secrets and jokes hidden in the corners of every big action panel, and without totally spoiling it for you, Vinegar Teeth isn’t the only milky-alien-insect-sack-man to deal with come the end.

This book is funny, action packed, it’s sweet and full of personality. The story of an unlikely friendship forged between a Cthulu-esque space squid, and a woebegone, dyspeptic with a love for big hats – just in time to save the world. Sophie Francois