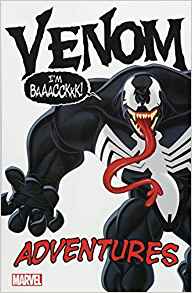 Always with the future in mind, Marvel continues its assault on the world with a book designed to grab the youngsters and reel them in to their world. Choosing one of Spiderman’s most iconic foes- Venom, the comic book titans have taken selected stories from its extensive back catalogue and roped in writers Fred Van Lente and Joe Caramagna, as well as artists Michael O’Hare and Cory Hamscher to re-imagine the whole thing for a younger audience. Not an easy task when you consider some of the dark storylines the alien symbiote has been involved in.

A neat handy stocking sized book, Venom Adventures starts with his origin, moves on to his hook up with Eddie Brock and continues to a possible conjoining with Harry Osborn. Thankfully the main characteristics of Venom are all still intact and transfer quite well to this story formta. The rage, the hate, the jealousy are all present and correct, albeit toned down somewhat. The artwork, while it suffices, is a little bit too Cartoon Network for my liking, but that’s the point. It’s not aimed at this forty something and if you are a die-hard Venom fan, this is probably not your thing either. But if you are a die-hard Venom fan with a smaller, budding fan in your life, you could do a lot worse than  pick this up for them as this is essential Venom for the kids. And it won’t give them nightmares… Chris Andrews