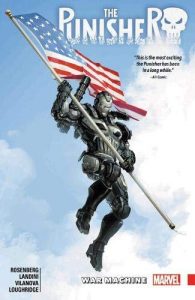 Frank Castle. Two words that strike fear into members of the criminal fraternity everywhere. A name synonymous with unwavering dedication to a cause that, dependent on your world view, is either morally reprehensible or absolutely justified.  Obsessed with the idea of justice, Frank (or as he’s more commonly known, The Punisher) is an individual who, at one time or another and for one reason or another, everybody has, can and will be able to identify with.  Unlike the rest of society that’s subsumed in endless shades of grey, Frank see’s everything in absolutes. Right or wrong, black or white, for him there is no middle ground and while his tenacity, focus and diligence have kept him alive during his long standing crusade, they’ve also led him to make some incredibly questionable decisions*, the last of which, his joining Hydra and fighting alongside the alternate Steve Rogers during the whole Secret Empire, saw him alienated from the superhero community.

Not that he ever was a “hero”, as mass murder is generally frowned upon in such circles, but the fraternity in which he was previously tolerated and given a wide berth, now wants his head on a platter; and justifiably so. Siding with the spymaster general, Nick Fury, in the aftermath of Rogers failed coup and becoming entangled in one of his schemes to topple a dictatorship with the aid of the War Machine armour only made matters worse as Frank being Frank, pushed the situation in all sorts of directions that Fury didn’t foresee and nearly started World War Three. And now, in the second volume of Matthew Rosenberg’s fantastic War Machine saga, and still in possession of the armour, Frank has come home to carry on with his mission, one that thanks to him becoming number one on the superhero most wanted list is made all the more difficult as every costumed crusader and super-powered vigilante has their sights set firmly on the Punisher.

As he evades his former allies and dispenses his own brand of jurisprudence in a crazed attempt to clear his name and his conscience, it soon becomes apparent that Frank isn’t as alone as he thought he was, as he’s recruited by a team of heroes whose past affiliations, and current objectives, are far closer to Frank’s way of doing things than those of their past comrades in arms. With a new assignment, Frank and his new partners set out to punish Hydra as only they can, with a semi-psychotic dedication to their cause and a total belief in superior firepower. And that’s when all hell breaks loose, as the Punisher takes on his former commander in chief and the entire pantheon of Avenger affiliated superheroes in an effort to get the job done and do what no-one else has. End Hydra once and for all.

It was a stroke of genius to transform Frank Castle into a weapon of mass destruction and level the playing field by giving him the ability to go toe to toe with even the most powerful of superheroes and villains and Matthew Rosenberg deserves a seriously large round of applause for flawlessly executing this chapter in Frank’s life. By obeying the cardinal Punisher rule and letting Frank be Frank, Rosenberg has crafted a story that shows it’s “hero” for what he really is, but at the same time allows the audience to empathise with him.  There’s no glorification of Frank’s methodology and no attempt made to tug at the readers heartstrings, Rosenberg just let’s Castle be himself in a  tale filled with violence, bloodshed and destruction that emphasises one of the truest of the human tenets. With enough determination and will, anything is possible.  The gritty, brutally precise art of Landini and Villanova hammers that point home, as nothing is left to the imagination as Frank does what Frank does best, and the only thing he knows, while buried up to his neck in a mire of fractured allegiances, double dealing and deception. Oh, and the future heralded by the final panel, means that Frank’s work is far from done. On the contrary, it’s only just beginning.  Suit up and get ready for war…  Tim Cundle