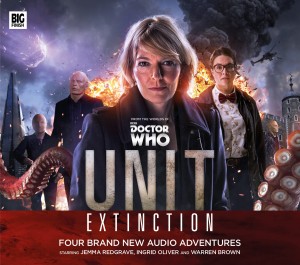 Big Finish is proud to announce further casting details for UNIT: Extinction, its full cast audio drama spin off from the Doctor Who TV series, which is licensed in a deal with BBC Worldwide.

Already announced is Jemma Redgrave as Kate Stewart, the Head of Scientific Research at the Unified Intelligence Taskforce, which investigates and confronts alien attacks on the planet Earth.

Once again joining Kate’s side will be the immensely popular UNIT scientist Osgood, played by Ingrid Oliver, who has appeared in the 50th anniversary special The Day of the Doctor, and the season eight finale Death in Heaven. Both Jemma and Ingrid will be returning to the Doctor Who TV series for its upcoming ninth season in the Autumn.

“We’re so happy to have Kate and Osgood joining us at Big Finish,” says producer David Richardson. “This team has been so captivating to watch on TV, and we’re looking forward to throwing some deadly challenges in their paths in these kinetic new episodes.” Also confirmed for the audio series is a new character Sam Bishop, an international trouble-shooter for UNIT who is sent to the world’s most dangerous hotspots. Playing this action role is Warren Brown, whose many leading TV roles include the BBC dramas Luther, By Any Means and Good Cop. Warren can soon be seen in the feature film Captain Webb, and a new drama series X Company. “We’ve worked with Warren several times before,” says David, “and even though he’s one of the busiest leading men around, he’s said he’ll be there for Big Finish. So we’ve created a principle role in UNIT especially for him, and he’ll be an essential member of the global team.”

The ensemble is also enhanced with the casting of Ramon Tikaram as Colonel Shindi. Ramon is well known from many recent TV series including Stella, Fortitude and Happy Valley, and films including Jupiter Ascending and Dragonfly. “Ramon also is busy on so many great things, but we’ve tempted him to the ranks of UNIT! He’s a lovely man to have around, and an extraordinary actor.” Finally, the role of loose canon UNIT officer Josh Carter is played by James Joyce, who has appeared in many Big Finish productions including Charlotte Pollard, as well as TV shows such as Downton Abbey, The Musketeers and Holby City. “James has done so much brilliant audio work for us, he’s earned his place in UNIT!” says David.

In UNIT: Extinction, Kate and her team confront an alien invasion by the Nestene Consciousness and its army of plastic Autons. The box set is released in November 2015 and is available for pre-order; three further UNIT releases will then follow at six monthly intervals.