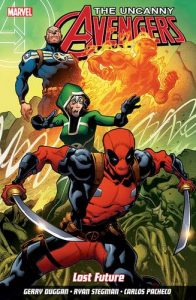 As Spock might have said to Kirk in his final moments (had they been at Comic Con rather than in the radiation saturated engine room of the Enterprise) “I have been, and always shall be, a fan of The Avengers”.  How could he not be? Driven as he is, and was, by logic, probability suggests that he would have to be a fan of the book. After all, Marvel’s premier all action squad of heroes has been one of their most consistent titles since it was first published and while there have been moments when it’s floundered, they have, thankfully, been few and far between. Meaning that logically, Spock would have been drawn to The Avengers with the same fevered curiosity and joy as an Astrophysicist is to the Drake Equation.  The members of the team may change, but its core values and mission remains the same as it has always done: to protect the Earth and everyone, and everything, on it from the dangers and threats that no-one else can.  That’s probably why the book has always attracted the best writers and artists and has been able to maintain its exemplary level of quality since its inception.  With Gerry Duggan and Ryan Stegman now assuming those duties on Uncanny Avengers Unity, you know before you’ve even read the first panel on the first page that this book is not only going to carry on that rock solid legacy, but it would also garner the Spock seal of approval. And yes, Spock reads comics. He loves science, he’s a forward thinking, intelligent, sensitive guy who isn’t fazed by fashion and enjoys the odd game of chess and problem solving.  He’s one of us.

It’s all change again for the Uncanny Avengers Unity Squad, now comprised of mutants, an Inhuman and your average, everyday heroes like Steve Rogers, Johnny Storm, Deadpool and Spider-Man. Talking of Spider-Man, he provides the first shock of the book, as he questions Steve Rogers’ judgement over the appointment of Wade to the team; and in the fallout from that discussion derides his loyalty. From that point on, the thrills, shocks, twists and turns just keep on coming, as the Unity Squad face a potential world ending ecological Inhuman threat and are only saved from the tendrils of green hell by the intervention of a face from the future and the all too human bond that their inhuman member shares with the enemy. It’s intelligent, gripping story telling that relies on characterisation as much as action and is, as you’d expect given that Ryan Stegman is the man responsible for such things, visually stunning.  But that’s not all folks, as the book’s not over until the Red Skull sings, and the tune he’s whistling along to in the last third of the book is “Make Rogers Suffer Like He’s Never Suffered Before”, a song that has our heroes dancing from one side of the world to the over in a vain attempt to stop him. Which boys and girls, is exactly how you set up a long game story arc, something that Gerry Duggan proves himself to be a master of as the Skull’s plot begins to unfold.  Like most things in life though, the real beauty of this books lies in the small things. The love hate relationships that develop and evolve between the team members, the continuing fallout from the Terrigen cloud and Rogues difficulties with the problems it continues to cause, Johnny Storm’s continuing abandonment issues and need to find somewhere to belong and Synapse’s fraught introduction to her “people”.  From beginning to end, Lost Future is fantastical story-telling at its finest and both reinforces and re-establishes The Avengers place at the top of the four colour food chain. Spock is going to love it… Tim Cundle