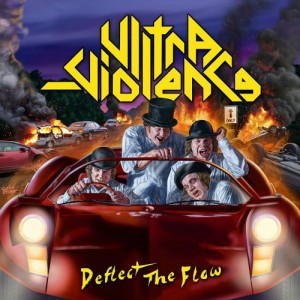 Ultra­Violence – Deflect The Flow (Candlelight)
Bay Area like thrash from the streets of Turin, Italy. Contrary what the band name might suggest, Ultra­Violence is a lot more brutal and heavier than Death Angel, coming close to a modern version of Testament / Exodus, while being as restless as Warbringer. Also Megadeth, in ‘Why So Serious’, and Overkill in ‘The Way I’ll Stay’ are coming out to play. A Venom cover, ‘Don’t Burn The Witch’ helps reveal the true colours of ‘Defect The Flow’. All of this has been done before, but who cares if the energy is right and the thrash riff has been put on the metal throne where it rightfully belongs if you ask me. Martijn Welzen