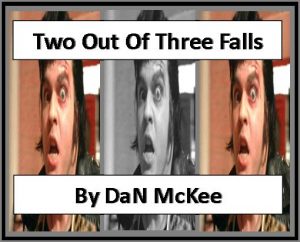 There is no wrestler I am more excited about than Shinsuke Nakamura. Which is why it is so odd that I have been so underwhelmed with him since his call up to the main roster. 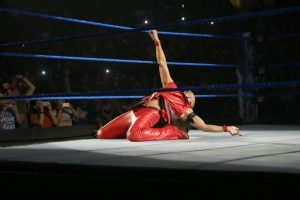 Whoever made the decision to not let him wrestle until Backlash may have thought they were doing him a favour, building up his mystique, making his first appearance more of an event. But I think in the end the approach only backfired. Every time Dolph Ziggler was able to remind the crowd that all Nakamura’s got is a great entrance and nothing else, seeing Nakamura do exactly that – enter the ring and not fight anyone – served only to prove Ziggler right.

Nor was the Nakamura build up helped by the way WWE limited his opportunities to speak. Unfortunately, the company has spent so many decades training its audience to boo anyone foreign and to mock non-English speakers, that they struggle when it comes to expecting an audience to cheer for someone for whom English is not only a second language, but a second language with which they clearly struggle. At any Indy show, and even in NXT, decent human beings of the wrestling world will hang on a wrestler’s every word in a promo and work to make sense of what they are saying before booing or cheering as appropriate (often because cheap microphones and a lousy PA make listening carefully a necessity). But the WWE universe has not been trained in this key skill, so Nakamura is expected to go out there, not do what he does best (wrestle) then somehow send the crowd wild with a single sentence in broken English which the audience has been conditioned all their lives to treat with hostility? It is to Nakamura’s credit that he has managed to be over as much as he has with this disastrous booking – and the unexplained addition of “the artist” to his name. But then it all comes down to the match.

Before Backlash, I watched Shinsuke and Dolph fight at a house show in Birmingham. I was hugely excited about the prospect of seeing my favourite new wrestler live for the first time and, like at Backlash, I was immediately confused by the decision to make his match the opening contest. With the anticipation building to see Nakamura’s debut, the initial burst of excitement at hearing his music hit right at the beginning of a show soon led to deflation as you realise that this is it. It’s happening. And despite your thinking it was, it is clearly not important enough a debut match to make it the main event or the mid-card show stealer. It’s just a decent curtain jerker in the eyes of WWE management.

And then, just like at Backlash, there is the match itself.

Instead of being the culmination of weeks of Ziggler’s taunts ending in a clear display of strong style dominance, Shinsuke spent most of the match on the mat selling.

Now don’t get me wrong – he is exceptionally skilled at this, and the crowd (because we love him) roots for him to fire up and fight back. But, if you are told for over a month that a guy can’t fight and is nothing more than an entrance, the match must be a response to that which proves the bad guy wrong. In both Birmingham and Backlash, Shinsuke’s victory was hard-fought, it was well deserved, but it wasn’t wowing. And I think wowing was what it needed to be.

All I am saying is that when Nakamura made his debut at NXT Takeover Dallas last year, that match was all I could talk about that Wrestlemania weekend. When Nakamura made his Smackdown in-ring debut, however, it did not erase the memories of the previous night’s spectacular show-stealer between Tyler Bate and Pete Dunne at Takeover Chicago, nor even did it outshine the shock victory of Jinder Mahal as WWE champion. Likewise, in Birmingham, much as I was pleased to see Nakamura live for the first time, it was Breezango’s hilarious comedy spots I was talking about as we walked back to the car, Kevin Owens versus Sami Zayn, and the “phenomenal” AJ Styles.

If I were booking Nakamura in the same way, building to a match at Backlash, I would have let him speak more in the build up, kick more in the build up, and at Backlash I would have had his match much way further down the card – probably penultimate to the main event – and I would have let him dominate it. It wouldn’t have been against Ziggler either. This competitive back and forth match – of which dolph is very good at doing – could have been his second or third feud. But I’d have Goldberg/Lesnared him to a stunning and unexpectedly swift victory against someone it seemed unlikely he would beat so handily in their first encounter, like a Kevin Owens or a Baron Corbin. I would have left the crowd in Chicago buzzing about what they just saw, not forgetting it three hours later.

Let’s hope they don’t fuck up any further from here. 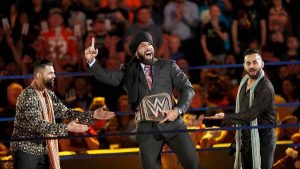 Meanwhile, as I already touched on – Jinder Mahal is our new WWE world champion. Surprisingly, I’m quite happy about the decision. I like how Jinder was let go, worked hard, reinvented himself, was rehired, and is now being given a well-deserved push in acknowledgement of his hard work. He reminds me a lot of JBL back when he first became an unexpected singles competitor and world championship contender. People love to hate him and he’s great at cutting an arrogant heelish promo. Now all we need is the returning Drew McIntyre to win NXT gold and Heath Slater to capture a title over on Raw and then have a 3MB reunion which leads to “the triple threat main event no one would ever have believed could be a main event three years ago”. That said, it’s a shame they’re doing the cheap, racist and boring “hate Jinder because he’s Indian” angle. That always diminishes my enjoyment of a wrestling storyline and in this case it is so un-needed. We could easily hate Jinder just for him being a total dick. We don’t need to bring his nationality into it!

But to bring nationality into it for just a second – how good is the WWE UK Championship division? If the match between Dunne and Bate at NXT Takeover didn’t make you immediately go out and buy a subscription to Demand Progress then you’re a stronger man than I. And that was after an already phenomenal UK Championship Network Special from Norwich, which was basically a Progress show in its own right too. I’m not usually one for national pride, and certainly not one for local pride, but seeing those two Brummies tear it up in Chicago and receive a standing ovation was about as close as I will ever get to it. If you haven’t seen the match yet, run, don’t walk! 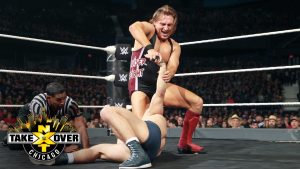 And I guess there’s important things happening on Raw too. But frankly, until their Universal Champion cares enough about their title belt to defend it then I shan’t care enough to write about it.

The biggest insult in wrestling today is lazy writers in Raw not even bothering to explain how the 30 day defence rule has not been violated. All it takes is one sentence from Cole, Graves or Booker T: “of course, normally a WWE title has to be defended once every 30 days, but Paul Heyman actually had it written into Lesnar’s contract that if he won the title he would be exempt from that clause and defend the title wherever, and however frequently, he wants.”

It’s not rocket science – but it is killing the business a little bit more every time you insult an audience member’s intelligence like this and take our suspension of disbelief for granted.

How hard would it be for whatever match they have planned at the ludicrously titled Great Balls of Fire PPV between Lesnar and the winner of the big number one contender’s match at Extreme Rules to have instead come about like this: Lesnar’s eventual opponent brings up the 30 day rule to Kurt Angle and gets Angle to strip Lesnar of the title. The Number One Contender’s match instead becomes a Universal Title match, and the winner ends up being the guy who got Angle to take the title off Lesnar. So Lesnar turns up, attacks the champ, and the same fight happens at Great Balls of Fire anyway, except the integrity of the Universal Championship has not been damaged. We then also have a nice bit of animosity and history between Angle and Lesnar which could come to a head somewhere down the line…

Anything is better than simply ignoring it and thinking the audience won’t notice. We’ve noticed.  And we’re getting pissed off about it.

Until next time… DM