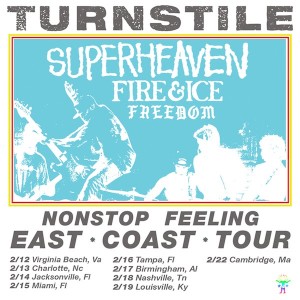 Turnstile have just announced two batches of U.S. tour dates in support of their forthcoming new album Nonstop Feeling. The band will tour the East Coast from February 12th through 22nd with Superheaven, Fire & Ice and Freedom as support. Following that, Turnstile will cover the West Coast from February 27th through March 4th with Superheaven, Take Offense, Forced Order and Seasons Change. Check out the full tour routing below (including dates supporting Madball in December and a European Tour in January) and check out this tour video sneak peek for a glimpse in the life of Turnstile on the road.

Nonstop Feeling was recorded in Baltimore with Brian McTernan (Circa Survive, Hot Water Music, Thrice) at Salad Days studio. Having a personal and musical history with McTernan, they came together to make a record that sounded bigger and louder than anything previous. The bright color scheme represents the idea of raw, unbridled expression, positive or negative, that is delivered in each of the twelve tracks. From the signature artwork to the energy infused tunes, this record creates a vibrant slam of emotion that defines Turnstile more than ever as a band leading their own way. Listen to “Gravity”, the first track to premiere off of Nonstop Feeling, now on Soundcloud and pre-order the album from the Reaper Records webstore. 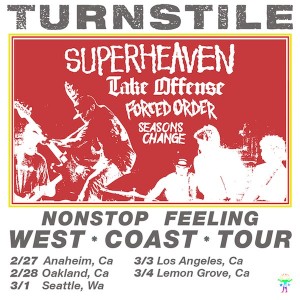