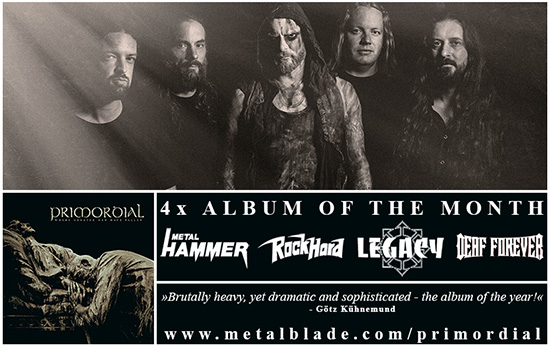 “Where Greater Men Have Fallen” to be released in less than two weeks!

Ireland’s PRIMORDIAL have made quite an impact at German press with their latest offering “Where Greater Men Have Fallen”! The album has won the soundchecks in all four major metal magazines: METAL HAMMER, ROCK HARD, DEAF FOREVER and LEGACY! This is the first time this has ever happened, so congrats to PRIMORDIAL!

Comments singer A.A. Nemtheanga: “When you make an album, you try and step outside of the rehearsal and studio world and see if you still have the hunger and the energy. You take nothing for granted and we certainly don’t so we are humbled by the critical reaction so far. Four #1s was not what we expected but we accept it graciously and hope the fans feel the same. See you on the field of battle. Vae victis!”

Here’s some quotes from the aforementioned magazines:
“When the the guitarists of these Irishmen play their profoundly melancholic, yet gladly non-clichéd Celtic riffs while singer Alan Averill’s voice is dripping with pathos, it’s goosebumps galore. And since WHERE GREATER MEN HAVE FALLEN is once more an album that works out well, the result cannot be less than six points!” (Robert Müller, Metal Hammer magazine Germany)

Listen to the new song “Come The Flood” at metal-hammer.de!

Visit metalblade.com/primordial to check out the lyric video for the title track “Where Greater Men Have Fallen” and to pre-order your copy of the album. The album will be available as a limited CD+DVD Digibook (Europe exclusive) as well as jewelcase CD and on different vinyl formats/colors. There will be a limited deluxe edition wooden boxset including the CD+DVD Digibook, an exclusive 7″, a leather wristband, a poster and a certificate of authenticity. This boxset will only be on sale via our European ebay store HERE, as well as at the four PRIMORDIAL release shows in Hamburg, Essen (sold out), Berlin and Dublin!

An eight track, fifty-eight minute magnum opus, “Where Greater Men Have Fallen” was recorded at Grouse Lodge in Dublin with Jaime Gomez (Cathedral, Angelwitch, Grave Miasma) and delivers some of the band’s deepest, most methodically arranged, thematically profound and plainly gripping compositions of their winding catalog of sonic enormity.