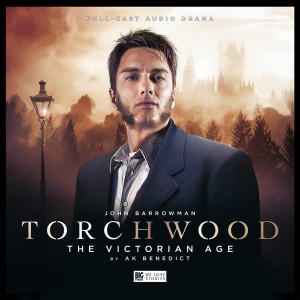 Everything has a beginning, and while The Victorian Age isn’t set at the start of the Torchwood story, it does chart a particularly difficult, and important, chapter in its formative years.  Nobody likes an inspection, especially one that could dictate the fate of your employment that’s being conducted by the “boss”; but that’s exactly the position that Jack Harkness finds himself in, when, in 1899, Queen Victoria visits Torchwood London to determine the worthiness of the organisation and whether it should remain in operation. It’s almost guaranteed that if something is going to go wrong, it’ll do so at the least opportune moment, which in this case would be just as the aforementioned patron arrives to instigate her most critical of undertakings. Which is presumably why, adhering to the tenants of murphy’s law, a life draining extra-terrestrial which was previously assumed to be deceased choses that particular moment to return to the land of the living, escape from its confinement and flee to the heart of London, becoming an immediate threat to all of its citizens in the process.  While capturing a footloose and fancy free alien would be just another normal(ish) day at work for Jack, this particualr day isn’t just another day. It’s the day that the Queen insists on accompanying him in its pursuit, and so with the life of Victoria and the future of Torchwood and The British Empire at stake, Jack and his partner give chase to their quarry.

Fast, furious, intriguing and immediately involving, The Victorian Age bristles with energy, it’s snappy dialogue, spot on sense of time and place and delightful characterisation barely give the audience time to draw breath before it plunges them headlong into the action. Benedict’s compelling story charts a little of Torchwood’s more elusive backstory while exploring the fractious relationship between Jack and the institutes founder, which even though it softens as the plot gathers pace, provides a crux and focal point for the drama as they both learn more about, and come to depend upon, each other.  The almost maternal chemistry between Victoria and Jack that evolves and develops throughout the story is due in no small part to John Barrowman and Rowena Cooper, the former’s performance defined by his ever dependable charisma, while the latter brings a confident, assured gravitas to her role as the head of the British Empire. It’s a steampunk inspired delight and the first of what will, hopefully, be many more historical Torchwood adventures. We are most definitely amused… Tim Mass Movement