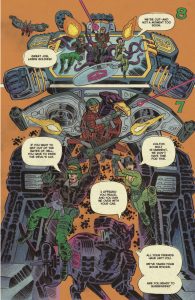 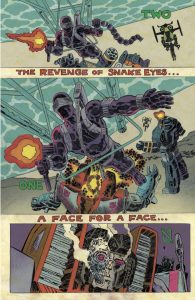 The fan-favorite mashup of toy box essentials, Hasbro’s TRANSFORMERS and G.I. JOE were given a unique, critically acclaimed comic book series published by IDW that took readers by surprise. In a series unlike anything that had come before it, Tom Scioli’s unique storytelling brought the elaborate settings and battles of childhood imaginations to the comic page. Now, at last, the complete series is available in a deluxe hardcover collection; Transformers vs. G.I. Joe: The Quintessential Collection

Heavily influenced by the “king of comics,” Jack Kirby, Scoili’s sense of design and aesthetic along with Transformers veteran co-writer John Barber won over critics and fans alike; with CBR calling it “Truly unlike anything else on stands right now, Barber and Scioli have made Transformers vs. G.I. Joe one of the most fascinating books on shelves today.”

Collecting all 13 issues of the maxi-series along with the debut #0 issue appearing on Free Comic Book Day 2015, plus the bonkers Transformers vs. G.I. Joe The Movie Adaptation, this hardcover collection has it all. Back matter includes page-by-page commentary by Scoili and Barber for each issue, along with a complete cover gallery!

“It’s the hardest I’ve ever worked,” says Scioli. “There’s blood on those pages. I gave everything I had to give. Go from T.H.E. P.I.T. to Cybertron and back again. Read the comic that inspired the movie! I’m already nostalgic for it and you will be, too!”