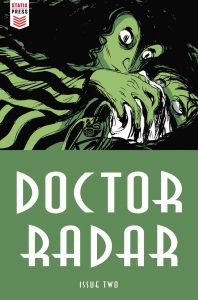 From Michael Moorcock’s Elric, and Enki Bilal’s The Nikopol Trilogy, to Snowpiercer and The Death of Stalin, which inspired major movies, Titan Comics has led the way in high quality, innovative translated editions aimed at a US audience.

Now Titan Comics is proud to announce a brand-new international imprint: Statix Press! This exciting new line will showcase the best comics from Europe and around the globe.

With the new Statix Press line, Titan will continue their rich history of publishing English language versions of classic material such as Philippe Druillet’s Lone Sloane, and Alejandro Jodorowsky’ Showman Killer, while introducing audiences to fresh new creators and titles from the best international creators.

The first titles kicking-off the new Statix Press line are: Doctor Radar, The Beautiful Death, Hercules: Wrath of the Heavens, and Under: Scourge of the Sewer.

Hitting stores November 22, 2017, Doctor Radar is set in Paris during the roaring 1920’s, and sees a gentleman detective investigate a series of horrific deaths, all the while playing a deadly game with a mysterious criminal mastermind known only as Doctor Radar! Written by Noël Simsolo with art by Bézían, Doctor Radar Issue #1 comes with a stunning cover by superstar artist Francesco Francavilla (The Black Beetle, Detective Comics).

The Beautiful Death, a post-apocalyptic, coming-of-age mini-series, written and illustrated by Mathieu Bablet (Shangri-La), asks the question – what does resistance mean when there’s nothing left to fight for? That’s what Wayne, Jeremiah, and Soham, the only survivors of a devastating alien invasion, struggle with – seeking a future that justifies their presence on a ruined world. Issue #1 arrives September 2017 and debuts with a special cover by iconic comic book creator Brandon Graham (Island, King City, G.I. Joe, Multiple Warheads)! 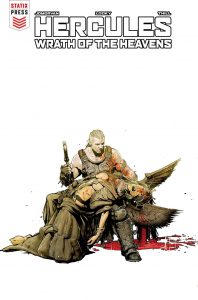 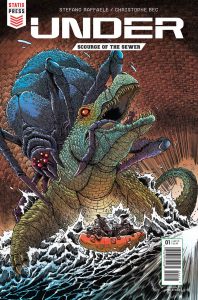 A bold new take of the Twelve Labors of Hercules, Hercules: Wrath of the Heavens by JDMorvan and Looky is a stunningly illustrated science fiction re-telling of the legend of Hercules, which debuted in August 2017. As war rages across the galactic frontier, Hercules – half-human, half-god super-soldier – faces his greatest enemy – his own demons – in a bid for truth and redemption. Issue #2 is due to hit comic stores in mid-September.

Then, on December 13, 2017 classic B-movie horror comes to comic book stores with Under: Scourge of the Sewer! In this new series, written by Christophe Bec with art by Stefano Raffaele (Marvel Generations: Hawkeye) and a cover by James Stokoe (Aliens: Dead Orbit, Prophecy), some people bury their secrets underground. In Megalopolis, the filth flows into the sewers. Disgraced Lt. Wilson Jericho will soon discover something monstrous will be crawling out of the sewers to rip the city apart! Lloyd Kaufman (director of Troma’s The Toxic Avenger) said: “Great and wise entertainment! If the French Nouvelle Vague, made a Troma movie, this would be it!”

Statix Press will also showcase Titan’s vast back catalogue of translated comics from a variety of genres including superhero with The Chimera Brigade and Masked plus fantasy/science-fiction with Khaal, and World War X, alongside the dark comedy series Norman!

“Growing up in Australia, I was exposed to comics from all over, and I’ve tried to maintain that breadth of reading into adult life. It’s why I enjoy my annual pilgrimage to Angouleme, and why I’m always on the lookout for something new,” adds Titan Comics’ brand manager Chris Thompson. “With our Statix Press line, we hope to continue Titan’s rich history of publishing essential classics like Bilal, Jodorowsky and Druillet, while introducing English-speaking audiences to fresh new creators and titles from around the world.”