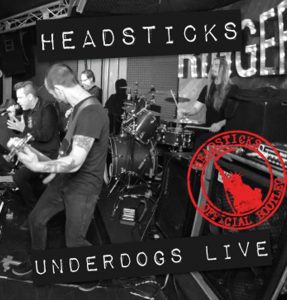 For a couple of years now Headsticks have been forging their own path, getting a number of releases under their belts and attracting a growing live following as they drive their revolution rock sound forward. Although you may consider this to be relatively early in their lifespan, Headsticks have decided to release a live album which although might be a bold statement, is actually testament to the fact that they have a fine repertoire of songs, and here, put to the test in front of a crowd at The Rigger,  Newcastle-Under-Lyme, they absolutely deliver the magic. To the unconverted, Headsticks play punk rock with a folk twist, or folk rock with an injection of punk energy depending on your perspective. Think the likes of Levellers rather than Flogging Molly although I think they have more than enough character to stand on their own two feet. Both punk and folk have a history of espousing rebellion, and the Headsticks use their songs as a means to voice their socio-political voice as they address a multitude of issues in their songs. This is a powerful performance and there is plenty of audience interaction and participation to bring the sweatbox atmosphere of the gig directly into your front room. Once again a winner from the Headsticks. Tom Chapman