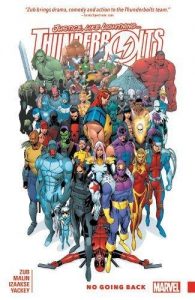 Everyone loves a bad guy or girl made good. Stories of individual redemptive journeys and atoning for past misdemeanours and sins always seem far more believable than those of rosy cheeked, blue eyed, muscles bound do-gooders. They appeal to one of the central tenants of the human condition that everyone knows to be true: that no-one is perfect. We all make mistakes, and at some point in our lives are overcome by our baser urges and “weakness”, because we’re all human; and humanity, as we’re all more than aware is flawed.  But it’s when we try to make up for our past by dedicating our lives to something much bigger, in an effort to prove that we can be better than we actually are, that’s when all of us are at our absolute finest, and that’s exactly why the Thunderbolts are (and I know this isn’t a popular point of view, but it is what it is) one of the greatest teams to have ever donned costumes and joined in the fight against all manner of evil. Because they’re human. Because the actions of their pasts and the mistakes that they’ve made have forced them to try to do better and despite their individual natures and the fact that they’re malcontents, screw-ups, they always do the right thing in the end. Or at least they did until the concluding minutes of No Going Back.

This is the story of the closing moments of Bucky Barnes’ Thunderbolts. It the tale of how they banded together to free their leader from the clutches of S.H.I.E.L.D. and then fell at the final hurdle when tested by Zemo and the Masters of Evil. And it’s the story of how James Buchanan Barnes came to realise that his hubris and need to do the right thing and save Kobik, the sentient cosmic cube, from everyone who would misuse her power, ultimately led to the unstoppable rise of Hydra and the downfall of his oldest and dearest friend.  Supporting the idea that the two figures most crucial to the evolution of the Marvel Universe are Cap and Bucky and that it was forged and crafted by heroes inspired by their lead and that the actions of its “founding fathers” eventually leads to its collapse, No Going Back revels in the notion that lies at the heart of the Thunderbolts. That no matter how powerful someone is, they are, at the end of the day, prone to making the same mistakes that everyone does. Because they’re human.

I make no secret of the fact that I’m a bit of a Jim Zub mark and that if his name is on the cover of a book, then chances are that I’m going to not only read it, but I’m also going to enjoy every single page, panel and frame of it. His run on the Thunderbolts has been fantastic, as he’s humanised each and every member of the team through the plots, characterisation, dialogue and the way they interact with each other, and he’s made the bad guys trying to do good into the kid of heroes that you actually root for and want to succeed.  Which makes the last chapter of this exquisitely rendered, thanks to Meesers Malin and Isaakze, story all the more heart-breaking and tumultuous. And as deserved as it was to have Bucky and his teammates given the recognition that they earned by playing a vital part in the ongoing mythology of the Marvel Universe, it’s also a little upsetting to know that these broken heroes are responsible for ushering in the darkness that’s about to consume it in Secret Empire. I have been, am and always will be a believer. Justice, like lightning… Tim Cundle