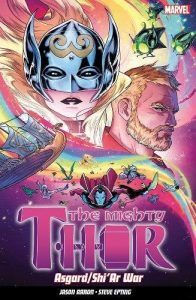 Every single time I see The Mighty Thor emblazoned on the cover of a book, my inner jukebox automatically starts playing that old Manfred Mann tune The Mighty Quinn but substitutes a lot of the song’s more prominent and strategic lyrics with the words ‘Thor’, ‘Asgard’, ‘Mjolnir’ and ‘Valhalla’. Normally this would be all sorts of cool as it means one of my current top ten titles has been assigned its own theme tune by my psyche, but I don’t actually like Manfred Mann. And as hard as I try to convince my brain that Manowar, Ensiferum or The Accused would be much more suitable for Thor, it’s refusing to accept the logic of my argument and keeps playing that dreary old sixties number over and over again. Still, it’s a small price to pay for the sheer pleasure that Jason Aaron’s book delivers; and in The Asgard / Shi’ar War, the title sort of gives away what the story is loosely about. Yes, the Shi’ar and the Asgard go to war with each other, but that’s just the background noise to what this particular arc in Jane Foster’s ongoing adventures is really about. At the centre are Maleketh and his master manipulator Loki, who, in the opening chapter almost foil the covert mission that Thor and her allies launch to free the Light Elves, and later play a part in ensuring that the duel that the ancient and cruel gods of the Shi’ar challenge Thor to, plays out in a  fashion of their devising.  It’s this duel that precipitates the war between the species, which in turn gives rise to two of the deadliest forces in the Universe, one of which is tamed with a little help from a most unexpected source and the other of which… Well, that’s a story for another day.

You know that old saying that about how if you want a job done properly, you should ask a woman to do it? Well, in Thor’s case it might just be true, as Jane Foster is doing pretty well in her new role as the God (dess) of Thunder and has taken to it in much speedier fashion that her predecessor did.  However, that doesn’t mean that I don’t miss the Odinson blindly charging in and using the old “dad fix” approach to everything he encountered (hitting it with a hammer). I do, but Jane Foster’s Thor brings the Mjolnir crunching violence as well as a much more thoughtful approach to the position than the Odinson did. Does this make her more worthy than he was? That I can’t say, as only time will really answer that. But the beauty and delicate care of Epting and Dauterman’s art in this book is equalled only by the underlying themes of living life to its absolute fullest and meeting every challenge head on, the absolute finality of mortality and its brief flickering flame, the ridiculous ideas that humanity has about ‘Gods’ and their motivations and how, when you do find something that’s worth fighting for, you should fight for it with every ounce of faith and every fibre of your being regardless of the cost. Because some things are not only worth fighting for, but they’re also worth paying the ultimate price for. Aaron’s storytelling, dialogue and characterisation are, as ever, incredible and thanks to the near infinite imagination of author and artists, The Mighty Thor* remains triumphant in every aspect.  Absolutely, totally and thoroughly recommended… Tim Cundle