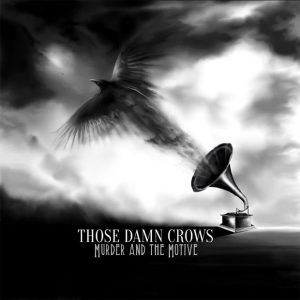 Once upon a time, back in the halcyon age of the good old days, we used to call bands like Those Damn Crows exactly what they were. Heavy Metal. Or, if you were a little more enlightened and wise to the way of the riff, Heavy Rock. And you know what? They’re not ashamed to be a metal band, and they shouldn’t be either as they’ve created a genuine rock monster that’s rammed to bursting with balls out anthems and infectious, immediate energy. They make you want to cast your inhibitions aside and sing-a-long with ‘em until it feels like your damn heart is going to explode, play air guitar until your fingers bleed, dance like it’s your last moment on Earth and head-bang until your neck near snaps. Murder and the Motive is everything that great metal should be. Loud, as devastating as a Mike Tyson uppercut in the seventh round and riddled with hooks, melody and choruses that smash their way into the pleasure centre of your brain. Those Damn Crows sound is a modern, yet timeless combination of Thin Lizzy, Throwing Copper era Live, Pantera and the reckless abandon of early eighties metal, that according to the “scene rulebook”  shouldn’t work. But, you know what they say, rules were made to be broken and on Murder and the Motive, Those Damn Crows shatter the rules into a million pieces and cast them to the four winds. And so should you. Fuck the rules; it’s time to get metal…  Tim Cundle