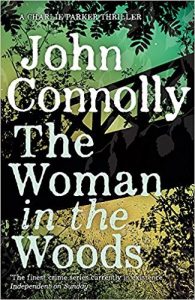 Not all secrets remain buried.

John Connolly’s long-running series featuring PI Charlie Parker reaches its sixteenth – and in my opinion best yet – instalment with his new novel, The Woman in the Woods. A man is searching for a missing expectant mother, aided by a taciturn woman of a frighteningly violent disposition. Together, they leave death in their wake as they continue their search.

A small boy living in rural Maine with his mother and grandfather hears his toy telephone ring. And when he answers, a woman he doesn’t know starts to talk to him.

When Parker is tasked with investigating the discovery of a woman’s body in a shallow grave in a Maine forest, or to be more precise, what happened to the child she apparently gave birth to shortly before her death, he finds himself drawn into a web of lies that involve a secret escape route for abused women, murder, racism – and a demonic being searching for the Fractured Atlas, a nod to another Connolly story fans of his writing will know well from the short story collection, Night Music.

Parker is aided by his longtime friend, Louis, a man dealing with his own demons – his memories of his relationship with his father, and the illness of his partner, Angel. As the various strands of the story converge, and the dream world collides with our own, the stage is set for a truly emotive finale.

With The Woman in the Woods, Connolly’s Charlie Parker novels have reached a new height – a hard bar to beat, but I can’t wait to see what comes next for Parker. Marie O’Regan