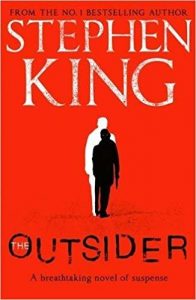 How do you find a killer with the perfect alibi?

The Outsider, the latest title from Stephen King, brings his total output of novels up to almost sixty. And he’s going from strength to strength.

When Terry Maitland, baseball coach, dad, the archetypal good guy, gets arrested for the brutal murder of a young boy, it looks like an open and shut case – there are witnesses, and forensic evidence galore. And yet… it’s not that simple (nothing ever is in a King novel), for Terry has an alibi – equally strong evidence to that convicting him shows that he was in fact somewhere else altogether at the time of the crime.

Detective Ralph Anderson is sure he has the right guy; there’s so much evidence, how can he doubt it? And then another case comes to light where the supposed miscreant also has an iron-clad alibi, and things aren’t so simple anymore.

Add to this some very strange occurrences around the investigation, and Ralph finds himself investigating a very wild theory – aided by a character you’ll recognise from King’s Mr. Mercedes trilogy – that would blow these open and shut cases wide open.

As usual, King’s an expert in portraying family life and everyday characters that a reader can and does sympathise with. What’s as frightening as any of the supernatural elements of this novel is the ease with which the characters’ lives unravel; the rapidity of Maitland’s transition in the eyes of his community from good guy to monster, and the effect this has both on Maitland and everyone around him.

The Outsider moves at a rapid pace towards a very satisfying conclusion; King fans won’t be disappointed. Marie O’Regan