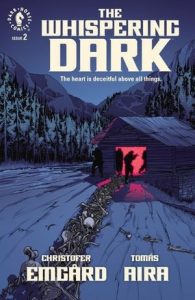 Picking up on the side of a mountain, far from home and full of military grade Pro-plus, the Special Forces team are still miles behind enemy lines, and descending further into desperation (and madness) with every step.

After finding various woodland creatures pulsing with disease, and witnessing their captured brothers in arms sacrificed to a Russian firing squad, the soldiers are at a loss, and twisting in the increasingly sinister winds.

Letting things get out of hand in an isolated civilian dwelling, they take a hostage, forcing her to be their guide through the Badlands, but even she has no explanation for where they’re heading – only a warning not to venture any further.

Hannah finds herself mentally warring with her preacher father once again, and sporting a broken nose, courtesy of the increasingly animal and strangely magnetic Lt. Watts. Beasts in the forest, and on the brain. I don’t think we’ll have to wait too much longer for our monsters. Sophie Francois