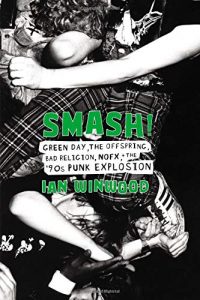 Having been submerged in the scene since nineteen eighty something or other and having lived through and, more by good luck than good management, survived the following decade when the world went punk shaped, as soon as Smash! arrived the cerebral needle that gauges my interest in all things literary shot straight into the redzone with such ferocity that it almost bent in half. Seriously, it was one of those moments when it was difficult to tell whether I was having a stroke or just dribbling with the sort of frenzied excitement that’s usually reserved for those moments when I stumble across rare Revelation Records pressings, first edition TSR D&D modules and strange and exotic American craft beers.  Having ascertained that I hadn’t been struck by a catastrophic transient ischaemic attack and that I was merely suffering from being a little too eager and overwrought, I dived straight into Ian Winwood’s historical account of the period in question.

One of the things that should be made clear right for the off is that not only did the author also live through and document the nineties affinity for punk rock in various musical publications, but he also has a passion for punk rock that’s both gratifying and a little overwhelming. It’s probably why he needed to write this book, so that he could find an outlet for that fervour before it totally consumed him, which I can completely relate to.  The amount of research and fact checking that the author undertook to make sure that he didn’t wrong foot or misplace any of the major players at the centre of the explosion and that that bands, labels and individuals who paved the road were given due diligence is staggering. And it doesn’t hurt that Winwood is a bloody great writer whose natural wit and sharp, incisive style turns what could have, at times, become a dry and slightly repetitive read into a compulsive, interesting and intriguing page turner.

While, in a perfect world, I’d have liked to have seen Pennywise featured a little more and maybe No Use For A Name, Propagandhi, Strung Out, Lagwagon, AFI and some of the bands who, snapping at the heels of the original trail blazers, rose to prominence at the end of the nineties make an appearance, that isn’t what this book is about. It’s about the bands who blew up and forever transformed punk rock and underground music and not only made them a part of the popular zeitgeist, but also managed to do something that their peers and progenitors never could. They took punk rock to the masses and in doing so, allowed what had been, up until then, outsider culture to become acceptable to a mainstream audience who  had previously derided, mocked and belittled it. Besides, there’s enough on Bad Religion in these pages to more than make-up for some of the bands who didn’t make the cut or don’t appear enough and to compensate for the fact that Winwood is wrong about the best Rancid album*.  The nineties was, as Dickens once said, the best of times and the worst of times, but it will always be the era when punk rock conquered the world and in doing so made things a little better and Ian Winwood perfectly captures the history of, and everything that made that moment in time special, with Smash!.  Bravo sir, bravo… Tim Cundle

*In case you’re wondering, it’s a toss-up between their first self-titled album and …And Out Come the Wolves and not, as Ian so vehemently believes, Let’s Go, which has always struck me as being a rushed, and slightly weak second act. But hey, that’s just my opinion…