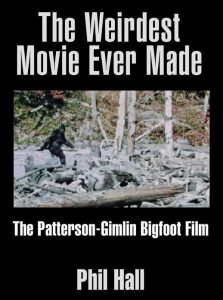 It certainly is a weird movie and what’s more I’d wager that the majority of people in western civilisation have seen it. It’s been parodied countless times by the likes of The Simpsons and is only 59 seconds long. I’m talking about the Patterson/Gimlin film footage of “Bigfoot”, the famous footage showing an alleged yeti type creature walking through the forest. When Roger Patterson and Bob Gimlin shot that grainy footage in 1967, little did they know that they were about to change popular culture as we know it. Minds would open to the possibility of other life forms, movies and documentaries would be made and really tall people would have more work in the TV/movie business. But was it real or was it all a hoax?

Luckily for us author Phil Hall has put together this book to examine all the evidence, both for and against. In the film the creatures movements are something that a human would struggle to recreate, but did you know that Patterson had an associate who was working on prototype costumes for the original Planet Of The Apes movie? But it’s not only about whether it was real or not, but more an examination of the films massive cultural impact. The Weirdest Movie Ever Made is very well researched and at only 122 pages long, does well to present the back story, the history as well as all of the pertinent facts that have built up around, and surround, the film.

Bigfoot is one of those enduring mysteries that people have marvelled at for years and while this book won’t answer the mystery for you, you’ll certainly enjoy the ride that Phil Hall takes you on. So is it real or isn’t it? That’s immaterial; The Weirdest Movie Ever Made supplies you with everything you need in order to make your own mind up about the films authenticity and decide whether Bigfoot is real or not, and was actually caught on film at the tail end of the nineteen sixties. So the next time you’re involved in an office conversation about the mythical (or not) beast, providing you’ve read The Weirdest Movie Ever Made – which you’d be a fool not to, you’ll at least know what you’re talking about… Chris Andrews

OrderThe Weirdest Movie Ever Made here