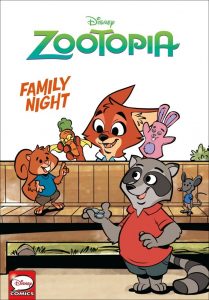 Disney Zootopia: Family Night finds Judy Hopps finally getting to spend some one-on-one time with her dad! They’re headed on a father-daughter camping trip, and Judy will earn a special Bunny Scout badge while she’s at it! The great outdoors sounds like an adventure to Judy, but her dad is more concerned about running into bears and foxes. Then when bad weather ruins their plans, Judy’s dad comes up with an alternative that isn’t what she had in mind. But her night ends up full of excitement and Judy’s time with her dad is still made special because they’re together.

Meanwhile, Nick Wilde wants to take his best friend to the biggest concert in Zootopia, but he will have to make some clever deals first . . . With no money and not much time, he’ll use his wits to earn the money–or whatever else it takes–to get his hands on two tickets.