Warning: preg_match() expects parameter 2 to be string, object given in /var/www/vip4/sites/vip6102689/httpd/htdocs/wp-includes/formatting.php on line 4866
 The Triumphant Return of the MARVEL TREASURY EDITION! - Mass Movement
x
Spread the love 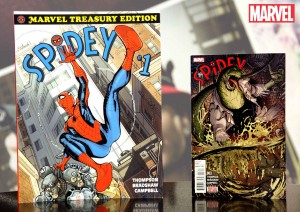 Swing into action True Believer and witness the return of the famous Marvel Treasury Edition! Gone from comic shops for nearly 35 years, be there as this long-lost format makes its big comeback with SPIDEY: ALL-NEW TREASURY EDITION VOL. 1! Presented in an oversized tabloid size format, this can’t miss tome collects the first five issues of Robbie Thompson and Nick Bradshaw’s hit series SPIDEY! Prepare for a webslinging Spider-Man experience like no other when the oversized adventures of teenage Peter Parker are released this June!

“Nick Bradshaw’s work on SPIDEY practically leaps off the page,” says Marvel SVP Sales & Marketing David Gabriel. “We knew we had to do something special for fans of this series. And since Robbie Thompson does such a wonderful job of capturing the early days of Peter Parker’s super hero career, we though SPIDEY was the perfect title to bring back this classic comic format.”

Today, he’s the world’s greatest super hero. But before he was amazing, he was just Spidey. Class is in session as he faces off against Doctor Octopus, the Sandman, the Lizard, the Vulture and more iconic Spider-Man rogues! Strap in and suit up as Thompson and Bradshaw bring you an action-packed thrill ride through Peter Parkers early days. Don’t miss the SPIDEY: ALL-NEW TREASURY EDITION VOL. 1 when it comes to comic shops and wherever books are sold this June!