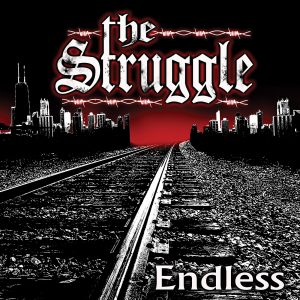 Not being a connoisseur of the street punk scene or a big Oi! guy, I have a very limited frame of reference,  which mainly revolves around the Business, the Bruisers, Loikamie, the Ducky Boys and early Dropkick Murphy’s, when it comes to describing bands that are part of those aforementioned scenes. And while I can hear elements of all of those bands, mainly Loikamie, in The Struggle, there’s far more to this band than that and far more going on in the grooves of Endless; and to simply label them as street punk would do them a massive disservice. There’s elements of metal, skate core and rock’n’roll in their sound and a palpable anger and energy that radiates from every song on Endless that helps hammer the continuous succession of hooks and sing-a-long choruses home. Closer in spirit to other new wave street punk bands like Allos Kosmos than the elder statesmen of the scene, The Struggle have hit the ground running and then some with the hard hitting, catchy as hell, destined to be a punk classic, Endless. Get it before everyone else does, so that when these chaps become one of the next big things, you can tell everyone you know that you were into them before they were… Tim Cundle