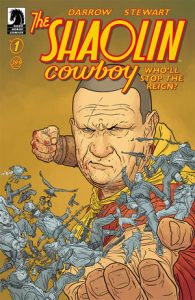 Sure, Geof Darrow ain’t the most prolific guy around but the man always churns out quality gear, and friends, let me inform you that Shaolin Cowboy is no exception to that trend. Who’ll Stop The Reign is my first visit to the insane dustbowl world of Shaolin Cowboy and I am kicking myself in the nuts for sleeping on the previous mini-series because this is that shit I do like.

Set in the middle of some unnamed American desert in the wake of a massacre, the Shaolin Cowboy rises up from the ruin of slaughter and tries to put himself together again beneath the deathly gaze of an unforgiving sun. Beset by chattering vultures intent on gnawing out his eyeballs, help arrives from the depths of our heroes consciousness in the surprising shape of two strangely familiar paternal figures…

The contrast between these inner voices guiding the Shaolin Cowboy is a delight. On one shoulder the open handed zen wisdom of a Confucius like spirit guide. Whilst on the other the swinging fists of a pug faced cowboy who looks a lot like Robert Mitchum. Guts and spirit as two sides of the same coin, it’s like My Two Dads on a cinematic existential level. think Jesse Custer’s Duke meets Pai Mei from Kill Bill and you’ll be on the right track young grasshopper.

Despite Shaolin Cowboy clearly drawing from the influences Darrows’ youth, the narrative devices of this issue feel very contemporary and relevant. The creator has seeded some scathing social commentary amongst the bloody handed carnage and astral Kung Fu. There’s some remarkably astute commentary on the right wing and Trumps America. In one scene some of the characters are listening to a Christian fundamentalist radio show as they demonstrate the hypocrisy inherent in that kind of viewpoint. ‘What kinda gun does Jesus carry?’ He don’t carry a gun HE IS the gun bubba’. Then it’s straight into an acid rinse on the banality of social media.

Not only has the obscenely talented Darrow concocted a story rammed with ‘what the actual f*@k’ moments but his pencils are quite literally a feast for the eyes. The sheer amount of subtle detail and physical nuance in each panel is staggering to behold. Shout out to Eisner award winner Dave Stewart who’s top quality colouring once again brings out the best in Darrow’s illustrations.

The Shaolin Cowboy: Who’ll Stop The Reign is off to a flying start. It’s like Darrow stuck the Kung Fu Series on Netflix, snorted a bag of dust and summoned the shade of Sam Peckinpah to guide his hand. It’s bloody, beautiful, batshit crazy and I cannot wait for issue 2. Nathan Bean