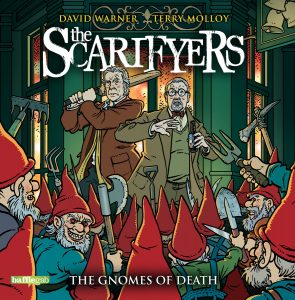 It’s been a while since The Scarifyers last saved Blighty from the rum, arcane, occult, supernatural and downright weird.  Actually, truth be told, it’s been far too bloody long since Harry Crow, Professor Edward Dunning, Alexander Caulfield-Brown and MI-13 squared up to the forces of darkness, gave them a sound thrashing and showed them what’s what and who the boss is. But now, with civilisation as know it threatened by the return of an ancient evil, a slighted would-be-wizard and brewer extraordinaire and legions of garden gnomes, they’re back to once more soundly pluck victory from the ever looming jaws of defeat. When bodies separated from their feet, and said seperated feet, begin to pile up, Harry and Dunning’s investigations lead them to the only two things that connect all of the limbless corpses, decorative lawn statues and Crow’s local, the Six Bells. And as more and more footless cadavers appear, Edward and Crow are plunged into a whirling, insidious miasma of century’s old magic, mythology and the secretive world of real ale and beer enthusiasts and brewers. The Gnomes of Death is a merciless, mysterious and wonderfully preposterous case that before it’s ended, might just shatter Harry’s faith in the one last thing that he’s come to love, trust and rely on.

They may have been out of action for a couple of years, but The Scarifyers haven’t missed a beat in their downtime and The Gnomes of Death slides straight back into their delightfully ridiculous and wonderfully absurd universe with ease, proving that the best series, like the finest of wines, just get better with age. Even if they have spent far too long being hidden away in the dramatic cellar. Combining established mythology and history with a delectably large slice of English eccentricity and inventive, clever comedy, The Gnomes of Death also makes gentle fun of “traditional” pastimes like Morris dancing and the slightly murky, and all too often exclusive, self-created macrocosms and elitist societies of beer and craft beer enthusiasts.  David Warner and Terry Molloy are as superb as ever as Crow and Dunning and it’s always a pleasure to hear the underappreciated David Benson work his thespian magic, even if he isn’t really given enough space to flex his hysterically funny dramatic muscles in this chapter of The Scarifyers exploits. Still, that minor niggle aside, The Gnomes of Death is a welcome and far overdue return for, and of, The Scarifyers and another essential entry in their ongoing mythology. It’s good to have you back chaps… Tim Cundle