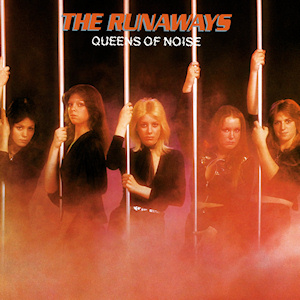 The Runaways – Queens Of Noise CD (Cherry Red Records)
As well as looking good, this female quintet play damn fine rock ‘n’ roll. Flecks of what was to become heavy rock, and even scrapping the punk barrel also. Think Kiss meets Ramones – but much better looking obviously! ‘Queens Of Noise’ is a no-nonsense raw out put bundle of ten songs that originally emerged in 1977. The heavy driving groove of guitar and bass, along with the dirty, yet melodious chorus of the albums title track confirms why it was one of their more ‘famous’ tunes. As with a lot of music coming from this era, it’s edgy but accessible; fun but also touching on decadent. The mastering to CD has given a great sound, although it has still cleverly captured the rustic production of the time. Some clichéd lyrics and even risqué subject matter is exactly what honest rock ‘n’ roll should capture, and The Runaways certainly embrace all. There is nothing technical about the playing here, but what Joan Jett, Lita Ford & co. demonstrate through out the thirty-seven minutes is solid, straight ahead passion. The moody, mean, ‘Born To Be Bad’ is the albums harshest moment, pure adrenalin filled punk rock that was probably a starting point for bands like the Lunachicks, whilst the likes of ‘’Neon Angels On The Road To Ruin’ is the closest these girls get to feminine rights. The Runaways simply don’t care, and ‘Queens Of Noise’ quite rightly sums up the epitaph. As usual, we get a decent re-packaging from Cherry Red, booklet, lyrics, plenty of old school photos, and some great liner notes. If The Runaways were around today, they would probably give many male rockers a real run for their money! Mark Freebase