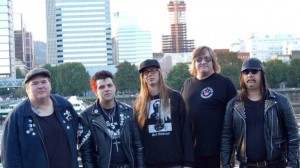 Poison Idea, one of the most infamous and instantly recognisable names in hardcore punk, are to release their first new album since 2006’s Latest Will and Testament. Southern Lord, responsible for releasing the Poison Idea reissues in recent years, are the ones irresponsible enough to bring to you, Confuse & Conquer on 6 April – and we cannot wait!

Soaking up respect from generations of hardcore punks and dishing none out, the dastardly denizens of mid-pace punk shred are in trademark give-a-damn form on Confuse & Conquer. With longstanding members Jerry A (vocals), Eric ‘The Vegetable’ Olsen (guitar) and Chris ‘Spider’ Carey (bass) alloyed by the fresh faces of Nathan ‘Skinny’ Richardson (drums) and Brandon Bentley (guitar), Poison Idea’s brand new full-length proves itself both recognisable and rewarding to listeners who have encountered them at any point from their 1980 birth onwards. Inventive beyond its steadfast roots, yet altogether as blunt as a stagediver’s knee hurtling towards your head, Confuse & Conquer sees the band, keen to waste not a single second more on non-music activities, riding high on this wave of creativity. Their forceful hardcore pummel is underwritten with dark humour, rage, disdain, and moments of real melancholy – well beyond the usual remit of the genre, but it’s to be expected of Portland’s nihilistic champions, proudly unaligned with any other sound out there. They were there at the beginning and they’ll be there at the end, and in the meantime they have a lot more punk rock left to produce.

Confuse & Conquer was recorded in their hometown by Joel Grind (Toxic Holocaust) and mastered by Brad Boatright (From Ashes Rise) at Audiosiege over the closing few months of 2014, and it shall see release via Southern Lord on 6 April as CD/LP and digital. In addition to the release of the brand new album, expanded reissues of War All The Time, Feel The Darkness and more are also in the works for the coming years. Meanwhile, Poison Idea have tours planned on both sides of the Atlantic, as well as a whole host of other happenings yet to be announced. Check out the recently announced European tour dates below:

“What can I say? We’re all happy with the record,” reported Jerry A., on the completion of Confuse & Conquer. “It’s a group effort; we all had a part in writing the songs. We’ve been screwing around for too long. We had to hang back and see whose heart was really in this thing we’ve been doing for thirty years and who was bullshitting. We have a lot of touring to do next year, to make up for the last one being cancelled due to people with the wrong priorities. Everybody in the band now lives to play and make music; that comes first. It always has, it just took a long time to filter out the flakes, and keep the diehards. So these guys know how to make this ship float. As far as I’m concerned, it feels like being reborn, having a second wind, a hardcore revival, and just discovering meaning, all at the same time. To put it mildly, we’re happy, I’m happy, and this is just the start. No stopping from here out.”