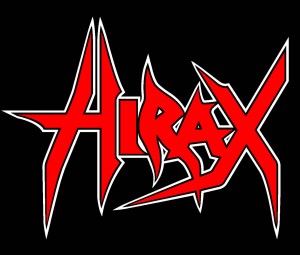 Katon W. De Pena has fought to fly the flag of thrash metal for decades now, without backing down one bit! Since his band’s inception in 1984 the countless number of E.P.s and albums they have produced has carved a legacy and gained the band huge respect from many well-established musicians. On the eve of Hirax’s UK debut we pinned down the thrash possessed metal maniac for a few words of wisdom…
Words: Mark Freebase

How does it feel to finally get over to the UK? Is it really your first trip here to gig with Hirax?
Yes this is the first time … over 30 years in the making, we have a lot of history with England going back to the early 1980s when Earache Records released their first flexi disc compilation with us on it! Also the UK press has always been very supportive of our band since 1985 when Metal Blade Records/Road Runner Records released our first album, so it is an honour for us to finally be coming there to play shows/concerts. We have been receiving a lot of letters and messages from the fans so we are really looking forward to doing these gigs….
Some of the fans have been so excited they have been posting pictures of their HIRAX concert tickets online!

Why has it taken Hirax so long?
Technically it was just a matter of finding the right booking agents and concert promoters now all those things are in place and we are finally coming to England!

Back in the hay-day of thrash metal, was a tour(s) ever on the cards?
Well, when our first two albums were released in 1985 and 1986 they charted very well with Kerrang! magazine, Rock Hard, Metal Forces and many others, but for some reason we never booked any European tours even though we have been around for over three decades and in some ways we are still a new band. It just never happened. 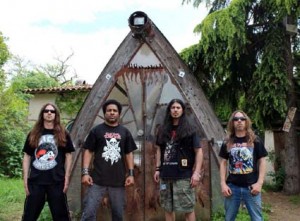 So what do you know about Hammerfest here in the UK? It’s quite an established festival now, so you must be pretty pleased to be playing it?
I think it’s an excellent way for us to start the first UK tour; I know that Hammerfest wanted our first concert date to be at their festival and they got it so we have planned a pure thrash metal show for all the fans to see as well as being our first concert on UK soil this is going to be epic!! Hammerfest is not going to know what hit them….

How will you go about choosing a set list, I’m sure you’ll find it hard with the band’s back catalogue?
Yes it is always hard picking a set list but what we have tried to do, is a couple of songs from each album… obviously there are some songs that we have to do, when bands like Napalm Death cover our song “Hate Fear and Power” more people discovered our band so yes that is one of the songs in the set but I can’t tell you everything we must save some of the surprises for the concert!!! I can tell you we will be playing some of the songs from our new album ‘Immortal Legacy’.

Have you heard much from other musicians about the state of music and especially thrash metal here in the UK?
I am friends with bands like SSS, Stampin’ Ground, Lawnmower Deth, Evile and from Ireland Gamma Bomb, along with many others so I know that the thrash metal scene is alive and well in good old UK…. Recently I was in Hollywood California at the Whiskey a Go-Go to see the band Satan (England) and a young thrasher came up to me and said he was from the UK and that his band will be playing with us in March so yes there is a thrash metal movement there for sure….

Is there any places or countries you are really looking forward to hitting on this current run?  …And why?
We will also be playing Glasgow, Birmingham, Manchester, Winchester, and London, we expect those shows to be wild and crazy! After those dates we will travel across Europe through Holland, France, Spain, Italy, Slovakia and Germany we have a lot of tour dates planned and we are looking forward to every single show…. 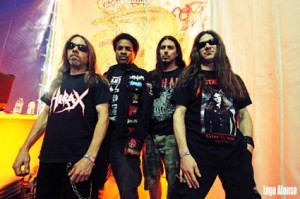 You are quite active personally regarding Hirax’s online information, what drives you to do this after so long? It’s always been a Hirax lifestyle for you hasn’t it? Have you ever thought about quitting?
I think every musician thinks about quitting once or twice in their career but for me the thing that keeps me going strong for all these years is honestly the fans… Touring and going on the road and meeting them is awesome the different cultures and different languages… I’m lucky to live the life that I do I am humbled by every person that I meet.

So what’s your thoughts on those that may have said ‘grow up’ or ‘haven’t you grown out of it yet?’
Music is the soundtrack to the soul and life, it keeps me young! And through music people are united no matter what gender, race, religion, long hair or short hair, we are all the same and bleed the same colour blood… red. As to thrash metal music I will always love it… it’s my life….!!!

Will you be checking many of the other bands out at Hammerfest? … or is it just not thrash enough for you?
Ha,ha… it all depends on the scheduling and what time we arrive at the festival. We are flying directly from Los Angeles California so that’s a hard question for me to answer, but I can tell you our show will be explosive!!!!

Which song do want to see fans go crazy for… the one that they will leave with, remembering the gig, the band?
We hope that they (thrashers) will be crazy and loud from the first song on! Whatever energy the audience gives us we will give it back tenfold…. Best thing I can tell all the fans is to check the festival schedule/website and make sure they know exactly what time we’re going on and get as close to the stage as possible because we want to see all your faces, See you soon England this is going to be one hell of a party/celebration Thrash till Death….

‘Immortal Legacy’ is out now on SPV Records