These Italian power metallers are finally making a welcomed return to the UK for Hammerfest VII in March. Vocalist Damna was able to give Mark Freebase the low-down in the band camp…

With ‘Hammerfest / AOR United’ on the horizon, how do you feel for the UK visit?
“We really can’t wait! It has been ages since our last show in the UK and we are sincerely disappointed about all the mess that surrounded the last two mini tours we should have joined on to during the last two years. As you all can imagine we are very, very much looking forward to this gig and to this awesome festival.”

There was some controversy surrounding Elvenking’s planned visit here for the ‘Viking Funeral’ dates as you say… has that helped or hindered the band in any way?
“Unfortunately, it didn’t help at all. First of all it was a huge disappointment for us and especially for our fans. Then add the fact that we were publicly insulted for not showing up. I don’t want to go through all this again, but it hasn’t been that nice for us. In the end, the first tour was cancelled and we couldn’t do much about the second one other than choose the lesser evil. Anyway, we’re now ready to deliver the best Elvenking show ever and to meet all our fans at Hammerfest!”

To those who don’t know Elvenking, what should they expect from your live show?
“It will be a very energetic show, I can tell you. Usually we ignite a magical relationship with our fans and as I said, we’re ready to deliver a very special performance in the UK.”

So is there any other bands who you’d be compared alongside, or will Elvenking stand out from the crowd?
“Many say we have a very personal sound. And I wouldn’t know how to describe it if not “melodic metal with folk influences”. We’ve worked hard for that since the beginning. If we really want to search some comparisons, I would say the classic bands that were our main inspiration are the likes of Skyclad, Maiden, Helloween, Blind Guardian or In Flames.” 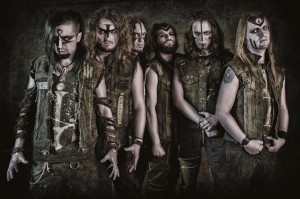 With 8 studio albums under your belts now, how will you choose a fitting set-list for the festival?
“Well, it’s not that easy; in fact we usually ask our fans which songs they want us to play live. We add some of the stuff we enjoy, mix it with a full history covering a number of songs and voilà!”

The band line up has been pretty solid now over the last 4 years or so… with no member changes since 2012. How has that affected everyone?
“It’s been really nice. Fortunately, we met the right guys/musicians at just the right time and this has given a strong solidity to Elvenking. As I always say, a band is like a marriage. At first it’s all love and passion, then things settle a bit. I think we’re in that second phase right now ahahah, but everything’s fine!! :)”

Any recommendations for ‘Hammerfest AOR United’ 2015?
“We hope you’ll all be at Hammerfest; I’m sure it will be a great festival! These are hard times for music so it’s a good chance to show that there are still loads of die-hard fans who enjoy hard rock and heavy metal. And I hope that you’ll be there if you missed us during the infamous VF dates too. See you there!”

‘Pagan Manifesto’ is out now on AFM Records