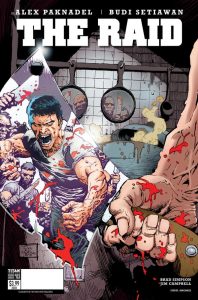 What do I even tell you at this point?

Rama is still murdering people who recognise him and Teja in prison, Bejo is still trying to scare everyone into staying off his criminal territory and taking him seriously, including his own dad, and Hammer Girl, Baseball Bat Man, and now The Assassin are still being called on to do what they do best, and that of course is plaster various alleyways, apartment blocks and restaurant kitchens with the viscera of their inconvenient and/or diobedient inhabitants.

Featuring a DELICIOUS mass fight scene in the aforementioned restaurant owned by Bejo’s decided nemesis Hansamu, blood and eyeballs fly as Bejo delivers a decapitated insult to his foe, before removing him from the equation quite completely.

The only promise made at the end of issue 3 is one of incoming chaos, and if you’ve enjoyed this series as much as I have, you’ll be more than ready for what I can only imagine is a comic that will probably need to come with its own plastic raincoat and a tub of Vanish. Sophie Francois