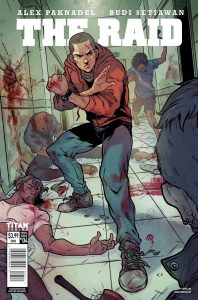 If it ain’t broke don’t fix it, especially if the previous three issues have been smart, witty, action packed and not so much blood soaked, as completely saturated.

In the final installment, we’re treated to more of the same, but oh, so much more.

With a series like The Raid, there’s never going to be any other kind of finish than a big one. As if it hadn’t been as explosive enough, between hammers, baseball bats, prison yard brawls, heads in gym bags, and usage of kitchen appliances that would violate even the most lenient of health and safety requirements.

Without spoiling for you what has been a violent delight of a comic, things get wrapped up here with vicious, and surprisingly poignant, finality.

Bejo bids a final farewell to his father, Rama does his best to keep protecting defiant Teja, and the pack of brutal assassins keep doing exactly what it is they do best – which is putting you right off your dinner, in their cool, calm, disgusting way.

There’s plenty of room here to keep going indefinitely, but the great thing about the story telling here is that every shard of the tale is punctuated with some brutal cliffhanger, making any pause in the tail a juicy nail-biter.

So when will we get more of this? Sooner rather than later, or never again? With cleverly standalone issues like this, it really doesn’t matter. Although I’d have to say I hope for the former. Sophie Francois