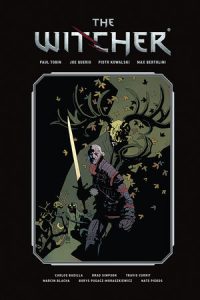 Despite knowing sweet FA about the (hugely popular) Witcher game series or any of its associated lore, having a cover drawn by the patron saint of weirdo folk horror Mike Mignola was always guaranteed to pique my interest. So without hesitation I plunged straight into this whopping 440 page tome. This collected volume from Dark Horse contains four story arcs House of Glass, Fox Children, Killing Monsters and Curse of Crows.

The first tale House of Glass is a twisting tale of deception and curses unfolding within the labyrinthine confines of a sinister house in the depths of a forest. Gerault the Witcher of the title is an affable enough lead character. We learn more about the horror of the Witchers world and the tragic details of his life as a monster hunter revealed through snippets of conservation with the other characters. It’s a very organic exposition that makes for a genuinely engaging and immersive read. Writer Paul Tobin ensures the story is dripping with Eastern European folklore, doomed lovers, haunted landscapes and feels very Mignola’esque in both its tone and structure. You could easily swap Gerault out for Hellboy and it would feel much the same. I am reminded of Robert E Howard’s Solomon Kane stories too although there’s definitely more black humour and dry wit here. Joe Querio’s stark pencils and sense of dynamics really compliment the sombre flavour of Tobin’s writing.

The other stories in the volume unfold with similar patterns and it’s only once I’d read a couple of these stories that I was struck with the feeling that there was a definite limit to Geralt’s character. There’s no real character development across the stories, instead each self-contained adventure feels more like a side quest and that the bigger story is taking place elsewhere. Having never read the original books nor played the game I cannot comment with any degree of accuracy, but I feel like there’s an epic saga waiting to be told with this character. Fingers crossed that Tobin actually gets an opportunity to tell it. Nathan Bean