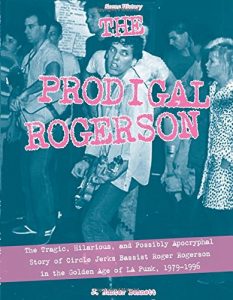 The first time I heard the Circle Jerks, it was like an explosion in the middle of my brain. Raw, furious, undiluted and oozing effortless anger, energy and aggression, their music touched a nerve which still shudders and vibrates with pleasure and releases an instant hit of endorphins and adrenaline whenever I spin Group Sex, Wild in the Streets and Golden Shower of Hits. And the first time I saw Edward Colver’s instantly recognizable photograph* of Roger Rogerson, I thought that the Jerk’s bass player was the coolest motherfucker that the Universe had ever breathed life into. Here was a guy who not only played in one of the progenitors of Hardcore, but also exemplified and channelled their music through every fibre of his being. But try as I might, I couldn’t find out anything about him. Even his bandmates didn’t know where he was as the last time that any of them had seen him was in late 1983 when, after being kicked out of the band, he’d stolen the bands van and driven off into the sunset never to be heard from again. Then thirteen years later, out of the blue, he showed up and tried and persuade his old comrades in arms to put the band back together so that they could give it one last shot. Two days later, Roger Rogerson was dead, having overdosed on a cocktail of legal and illegal drugs. The Prodigal Rogerson is the story of the rise and fall of one of punk rock’s forgotten innovators and what happened to him during those “missing” years, and it is a thoroughly engaging, and often bizarre, journey through the life of a man whose creative genius always played second fiddle to the demons that haunted him.

Roger Dowding, known as Roger Rogerson to the LA Punk scene, was, and still is, as much of a mystery and an enigma to those who knew him best (his wives, his stepson, his friends and bandmates) as he was to the rest of the world.  He was the Hardcore scene’s very own Walter Mitty, reinventing his past and who he was at any given opportunity. No two versions of his story are exactly the same, as he became different things to different people in order to ingratiate himself with them. Beset by tragedy, Dowding lived fast and died far too young, and while it was eventually clear to everyone who he spent any time with that he preferred the fantasies he created to the reality he lived, it was also obvious that his past was the source of his problems and pain. He walked away from music and tried to live a “normal” life, but whatever it was that drove him, wouldn’t let him be happy unless he was reaching for the dream of fame, fortune and all the trappings that go with it in an effort to outrun his ghosts. The stories of his life, that he went AWOL from the military, had been stabbed on a covert mission, was a classically trained musician run side by side with the tales of wanton excess and debauchery that punctuated his existence and were, ultimately, the cause of his constant misfortune and eventual downfall. Told via a series of interviews with the Circle Jerks, his family and friends, The Prodigal Rogerson, is a fitting tribute to an oft forgotten and woefully ignored figure who, while he may not have believed in it, gave his soul to punk rock.  Thoroughly recommended… Tim Cundle

*This is the photograph that I was talking about. Told you. Coolest motherfucker you ever did see. 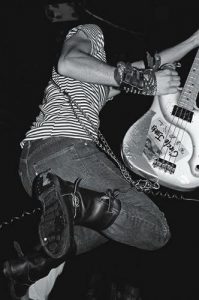