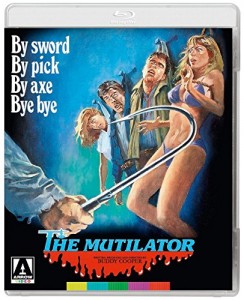 You’ve got to love a film with a strap-line like ‘By sword, by pick, by axe… bye bye!’ And they haven’t even mentioned the outboard motor or the fishing gaff…! But there’s a reason this 1984 film isn’t remembered in the same light as the likes of ‘A Nightmare On Elm Street’ from the same period, and that’s because it’s a bit crap, to be honest. Yes, the effects are gruesome enough to raise the odd eyebrow – the fish gaff through the crotch in particular – but when you honestly couldn’t give a toss about a single character, it’s hard to summon much excitement when they get butchered, even if it is in an inventive manner. The storyline is pretty much non-existent (but involves a maniac out for revenge and a half dozen annoying teenagers who like to party), the acting is consistently atrocious, and the main theme song is so bad you’ll want to pierce your own eardrums with a knitting needle to blot it out before the end.

That all said, this does have a certain charm for anyone who was a teenager in the early Eighties, who would sit through any old shit if there was a chance you’d perhaps see a gory death or a bare breast in half profile. And Arrow have really ladled on the extras, so as well as seeing this stinker in a high definition transfer for the first time, you get a making of documentary, which is as painfully dull as the film itself, and a documentary about the effects, which isn’t half bad, plus an introduction to the film, and some alternate scenes/openings (it was also known as ‘Fall Break’), plus the usual trailers, commentaries and TV spots. It’s a generous package given the questionable quality of the main feature, but if low-budget by-the-numbers Eighties slashers get your blood up, I’m sure you’ll be more excited about it than me. Ian Glasper