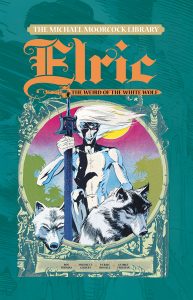 Confession time: I don’t particularly like Michael Moorcock. Don’t get me wrong, the guy himself is great – I was involved peripherally when Savoy Books were publishing stuff like James Cawthorne’s graphic adaption of The Jewel In The Skull and his illustrated edition of The Golden Barge back in the late 70s – but for some reason I never quite could get into Moorcock’s prose.

One way it did work for me was in the aforementioned Jewel In The Skull, and later, First Comics adaptions of the Elric Of Melnibone universe. I still have tattered copies of three or four of them somewhere, but only bits of stories all over the place. Nice, then, that in here, Volume 4 of their Michael Moorcock Library, Titan provides me with the first full sequence I’ve seen in years – in this case, The Weird Of The White Wolf, collecting the tales The Dream Of Earl Aubec, The Dreaming City, While The Gods Laugh, and The Singing Citadel. Nicer still that the colour – always a little less-than-it-could-be on First’s stock – has been remastered throughout.

The Dream Of Earl Aubec is a framing device, of course, where the titular character is shown the events of the other stories by the Dark Lady Of Kaneloon, yet in many ways its spectacular rendering by artists Michael T. Gilbert, George Freeman and P. Craig Russell surpasses the actual Elric episodes themselves. Nonetheless, rather like the Royal Protector, you’re swept into the Young Kingdoms on a hallucinogenic and increasingly compelling ride that takes you from Imrryr to Dhakosi and beyond, meeting along the way such characters as Moonglum, Shaarilla Of The Dancing Mist, Haashaastraak the King Of The Reptiles, and Yishana, Queen Of Jharkor.

Roy Thomas – who originally introduced Elric into his Conan universe and was therefore chosen for the job – handles the adaptive writing chores, and so for those of you who’ve heard me wax lyrical about his skills before now, you know you’re in safe hands. For those who haven’t, trust me, you are. With an introduction by original publisher Mike Friedrich and a gallery of the original covers, these First comics are a very accessible door into the Moorcock mythos. Open it. Mike Wild