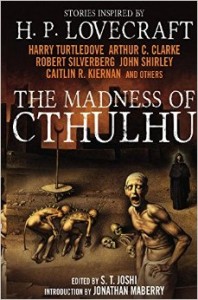 The Madness of Cthulhu (Titan Books)
A collection of stories inspired by HP Lovecraft’s seminal classic ‘At the Mountains of Madness’ featuring amongst others Arthur C. Clarke’s affectionate parody ‘At the Mountains of Murkiness’ and Sci Fi stalwart John Shirley’s ‘The Witness In Darkness’ . The stories range from a traditional Antarctica setting, based on Lovecraft’s original work (Michael Shea’s ‘Under The Shelf’) to the drug tinged 60’s Haight Ashbury (Harry Turtledove’s enjoyable ‘The Fillmore Shoggoth’) , 19th Century Mid-Western America (Caitlin R Kienan’s ‘A Mountain Walked’ written as a series of first person diary entries), the philosophical Ephesus based ‘Diana of the Hundred Breasts’ (Robert Silverberg), which I particularly enjoyed as Silverberg really captures the atmosphere of the ancient city as I remembered it, to the more modern ship based tale of ‘Cthulu Rising’ by Heather Graham.
In the main the stories are good although I found a few didn’t hold my attention as much as others and a few left me plain baffled about what the writer was trying to convey other than a sense of other worldliness and dread. None of the writers emulate Lovecrafts’s indulgent and deliberately complex style of writing – which makes this an easier read for readers who, unfamiliar with the cosmic horrors and things beyond the veil that inspired this tome, may be put off by Lovecraft’s extravagant text, but conversely none of the writers really captures the richness of his writing. A decent introduction to the Cthulu Mythos for the Lovecraft virgins. Ian Pickens